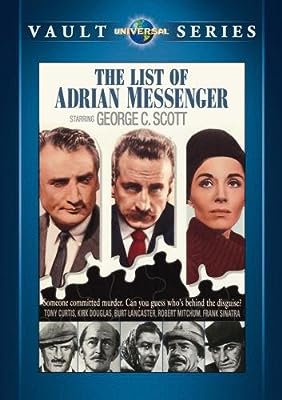 Price:
As of 2022-11-27 08:24:58 UTC (more info)
Product prices and availability are accurate as of 2022-11-27 08:24:58 UTC and are subject to change. Any price and availability information displayed on http://www.amazon.com/ at the time of purchase will apply to the purchase of this product.
Availability: Not Available - stock arriving soon
Buy Now from Amazon
Product Information (more info)
CERTAIN CONTENT THAT APPEARS ON THIS SITE COMES FROM AMAZON SERVICES LLC. THIS CONTENT IS PROVIDED 'AS IS' AND IS SUBJECT TO CHANGE OR REMOVAL AT ANY TIME.

Superstars Kirk Douglas, Tony Curtis, Burt Lancaster, Robert Mitchum and Frank Sinatra headline the witty thriller The List of Adrian Messenger directed by Academy Award(r) winner John Huston. A retired officer (Academy Award(r) winner George C. Scott) must uncover the identity of a mass murderer who is killing off the potential heirs to a family fortune. The only clues are the names on the list of murdered heir Adrian Messenger. The tension builds as the final evil unfolds during a suspense-filled fox hunt. Let the chase begin!

The Treasure of the Sierra Madre [Blu-ra...