The Man with No Name Trilogy (A Fistful of Dollars / For a Few Dollars More / The Good, The Bad, and the Ugly) [Blu-ray] 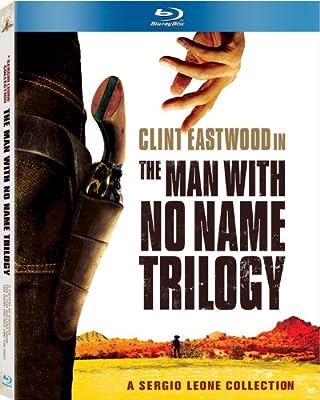 Price: $39.99
As of 2023-02-05 16:02:07 UTC (more info)
Product prices and availability are accurate as of 2023-02-05 16:02:07 UTC and are subject to change. Any price and availability information displayed on http://www.amazon.com/ at the time of purchase will apply to the purchase of this product.
Availability: Not Available - stock arriving soon
Buy Now from Amazon
Product Information (more info)
CERTAIN CONTENT THAT APPEARS ON THIS SITE COMES FROM AMAZON SERVICES LLC. THIS CONTENT IS PROVIDED 'AS IS' AND IS SUBJECT TO CHANGE OR REMOVAL AT ANY TIME.

Sergio Leone “spaghetti westerns” did not simply add a new chapter to the genre…they reinvented it. From his shockingly violent and stylized breakthrough, A Fistful of Dollars, to the film Quentin Tarantino calls “the best-directed movie of all time,” The Good, the Bad and the Ugly, Leone’s vision did for westerns what talkies did for all movies back in the 1920s: it elevated them to an entirely new art form. Fully restored, presented in high definition with their best-ever audio, and including audio commentaries, featurettes and more, these films are much more than the definitive Leone collection...they are the most ambitious and influential westerns ever made.

A Fistfull Of Dollars
Clint Eastwood’s legendary “Man With No Name” makes his powerful debut in this thrilling, action-packed classic in which he manipulates two rival bands of smugglers and sets in motion a plan to destroy both in a series of brilliantly orchestrated setups, showdowns and deadly confrontations.

For A Few Dollars More
Oscar® Winner Clint Eastwood** continues his trademark role in this second installment of the trilogy, this time squaring off with Indio, the territory’s most treacherous bandit. But his ruthless rival, Colonel Mortimer (Lee Van Cleef, High Noon), is determined to bring Indio in first...dead or alive!

The Good, The Bad And The Ugly
The invincible “Man With No Name” (Eastwood) aligns himself with two gunslingers (Lee Van Cleef and Eli Wallach) to pursue a fortune in stolen gold. But teamwork doesn’t come naturally to such strong-willed outlaws, and they soon discover that their greatest challenge may be to stay focused – and stay alive – in a country ravaged by war.

Review for A Fistful of Dollars:
A Fistful of Dollars launched the spaghetti Western and catapulted Clint Eastwood to stardom. Based on Akira Kurosawa's 1961 samurai picture Yojimbo, it scored a resounding success (in Italy in 1964 and the U.S. in 1967), as did its sequels, For a Few Dollars More and The Good, the Bad and the Ugly. The advertising campaign promoted Eastwood's character--laconic, amoral, dangerous--as the Man with No Name (though in the film he's clearly referred to as Joe), and audiences loved the movie's refreshing new take on the Western genre. Gone are the pieties about making the streets safe for women and children. Instead it's every man for himself. Striking, too, was a new emphasis on violence, with stylized, almost balletic gunfights and baroque touches such as Eastwood's armored breastplate. The Dollars films had a marked influence on the Hollywood Western--for example, Sam Peckinpah's The Wild Bunch--but their most enduring legacy is Clint Eastwood himself. --Edward Buscombe

Review for The Good, the Bad, and the Ugly:
If you think of A Fistful of Dollars and For a Few Dollars More as the tasty appetizers in Sergio Leone's celebrated "Dollars" trilogy of Italian "Spaghetti" Westerns, then The Good, the Bad, and the Ugly is a lavish full-course feast. Readily identified by the popular themes of its innovative score by Ennio Morricone (one of the bestselling soundtracks of all time), this cinematic milestone eclipsed its influential predecessors with a $1.2 million budget (considered extravagant in the mid-1960s), greater production values to accommodate Leone's epic vision of greed and betrayal, and a three-hour running time for its wide-ranging plot about the titular trio of mercenaries ("Good" Blondie played by rising star Clint Eastwood, "Bad" Angel Eyes played by Lee Van Cleef, and "Ugly" Tuco played by Eli Wallach) in a ruthless Civil War-era quest for $200,000 worth of buried Confederate gold. Virtually all of Leone's stylistic attributes can be found here in full fruition, from the constant inclusion of Roman Catholic iconography to a climactic circular shoot-out, along with Leone's trademark use of surreal landscapes, brilliant widescreen compositions and extreme close-ups of actors so intimate that they burn into the viewer's memory. And while some Leone fans may favor the more scaled-down action of For a Few Dollars More or the masterful grandiosity of Once Upon a Time in the West, it was The Good, the Bad, and the Ugly that cemented Leone's reputation as a world-class director with a singular vision. --Jeff Shannon

The Moment of Truth (The Criterion Colle...