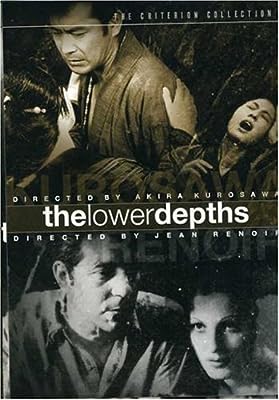 Price: $24.26
Availability: Not Available - stock arriving soon
Buy Now from Amazon
Product Information (more info)
CERTAIN CONTENT THAT APPEARS ON THIS SITE COMES FROM AMAZON SERVICES LLC. THIS CONTENT IS PROVIDED 'AS IS' AND IS SUBJECT TO CHANGE OR REMOVAL AT ANY TIME.

Akira Kurosawa's The Lower Depths, an adaptation of Maxim Gorky's classic proletarian play. Instead of his usual broad canvas, Kurosawa instead explores the possibilites of the stage in this film, finding intimacy in his examination of a group of destitutes, set during one of Japan's most prosperous ages. Starring an ensemble cast led by frequent collaborator Toshiro Mifune, the film is a Buddhist meditation on the human condition, yet also a poignant and comic investigation of the conflict between illusion and reality.

Criterion's two-disc double bill of The Lower Depths provides a scintillating lesson in comparative cinema. When Jean Renoir adapted Maxim Gorky's acclaimed 1902 play in 1936, he changed the setting from Czarist Russia to an unspecified French slum, casting the great Jean Gabin as a thief struggling to rise from his misery, and Louis Jouvet as the benevolent Baron, a flat-broke gambler on a downward social spiral. Renoir altered the play considerably, retaining its serious tone while infusing it with his trademark warmth and humanity. Two decades later, Kurosawa remained faithful to Gorky while daring to craft The Lower Depths as a comedy, in which Edo-period peasants (including Toshiro Mifune, in Gabin's role) concoct lavish illusions to ease the burden of their impoverished reality. While both films remained relatively overlooked during the careers of their creators, Criterion's DVD restores them to the prominence they deserve.

Both films have been meticulously restored and remastered to Criterion's high standards; Renoir's film still shows its age, but it will never look or sound better than it does here, and Renoir provides an informative introduction culled from the same archival materials featured on Criterion's The Rules of the Game DVD. Better yet, Kurosawa's film is accompanied by a superb commentary by peerless Japanese film scholar Donald Richie, who provides a feature-length treasury of anecdotes (he had actually visited Kurosawa's set in 1957), thematic analysis, production history, and scholarly insight. A 33-minute excerpt from the Japanese TV series Akira Kurosawa: It Is Wonderful to Create offers rare interview clips with Kurosawa and surviving members of his cast, along with script, art design, and storyboard details to illustrate Kurosawa's creative process. Kurosawa expert Stephen Prince profiles the esteemed cast of the 1957 film, and exclusive essays about both films are included in the accompanying booklet. As a kind of Rorschach test for each director's approach to style and theme, The Lower Depths offers a back-to-back master class in the art of adaptation. --Jeff Shannon

This Land Is Mine