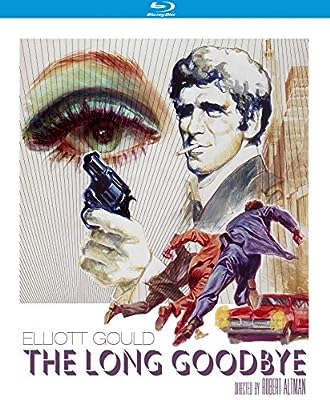 Price: $18.99
As of 2022-08-19 00:11:42 UTC (more info)
Product prices and availability are accurate as of 2022-08-19 00:11:42 UTC and are subject to change. Any price and availability information displayed on http://www.amazon.com/ at the time of purchase will apply to the purchase of this product.
Availability: Not Available - stock arriving soon
Buy Now from Amazon
Product Information (more info)
CERTAIN CONTENT THAT APPEARS ON THIS SITE COMES FROM AMAZON SERVICES LLC. THIS CONTENT IS PROVIDED 'AS IS' AND IS SUBJECT TO CHANGE OR REMOVAL AT ANY TIME.

Elliott Gould (Busting) gives one of his best performances as a quirky, mischievous Philip Marlowe in Robert Altman's (Thieves Like Us) fascinating and original send-up of Raymond Chandler's classic detective story. Co-starring Nina Van Pallandt, Sterling Hayden, Mark Rydell and Henry Gibson with a screenplay Leigh Brackett (The Big Sleep), The Long Goodbye is a gloriously inspired tribute to Hollywood with an ending that's as controversial as is it provocative. Private eye Philip Marlowe (Gould) faces the most bizarre case of his life, when a friend's apparent suicide turns into a double murder involving a sexy blonde, a disturbed gangster and a suitcase of drug money. But as Marlowe stumbles toward the truth, he soon finds himself lost in a maze of sex and deceit - only to discover that in L.A., if love is dangerous... friendship is murder.