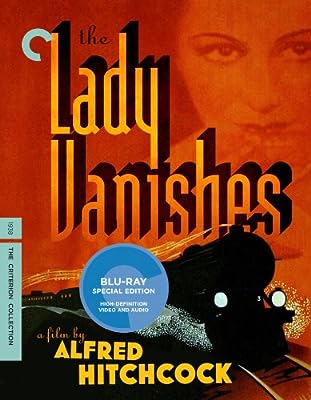 Price: $27.99
As of 2022-12-09 16:05:52 UTC (more info)
Product prices and availability are accurate as of 2022-12-09 16:05:52 UTC and are subject to change. Any price and availability information displayed on http://www.amazon.com/ at the time of purchase will apply to the purchase of this product.
Availability: Not Available - stock arriving soon
Buy Now from Amazon
Product Information (more info)
CERTAIN CONTENT THAT APPEARS ON THIS SITE COMES FROM AMAZON SERVICES LLC. THIS CONTENT IS PROVIDED 'AS IS' AND IS SUBJECT TO CHANGE OR REMOVAL AT ANY TIME.

In Alfred Hitchcock’s most quick-witted and devilish comic thriller, the beautiful Margaret Lockwood (Night Train to Munich), traveling across Europe by train, meets a charming spinster (Dame May Whitty, Suspicion), who then seems to disappear into thin air. The younger woman turns investigator and finds herself drawn into a complex web of mystery and high adventure. Also starring Michael Redgrave (The Browning Version), The Lady Vanishes remains one of the great filmmaker’s purest delights.

Alfred Hitchcock had hit his early, near-flawless stride by the time of The Lady Vanishes, the 1938 classic that seems as bright and funny now as the day it was released. After the deliciously comic opening reels at a mittel-European hotel where a train has been snowed in, the plot kicks into gear: a very nice old lady (Dame May Whitty) suddenly disappears in mid-train ride. Worse, the young woman (Margaret Lockwood) who'd befriended her can't find anybody to confirm that the lady ever actually existed. Luckily, suave gadabout Michael Redgrave is at the ready--to say nothing of two English cricket fans, brought to memorable life by Basil Radford and Naunton Wayne. The film bops along briskly, borne along on the charm of the players and the witty script by expert craftsman Frank Launder and Sidney Gilliat (who also did the delightful Green for Danger and the St. Trinian's films), to say nothing of Hitchcock's healthy sense of humor about the whole thing--indeed, it may be the most "British" of his films. --Robert Horton

On the DVD
This two-disc package is the second time Lady has been issued by Criterion, and features a (visually and aurally) improved transfer of the film. It retains a commentary from the earlier release, but adds tasty extras: a half-hour documentary from Leonard Leff (standard stuff, but a nice intro to Hitchcockian ideas), plus a 10-minute audio excerpt from Francois Truffaut's legendary book-length interview with Hitch. This is not only a good way to hear Hitchcock on The Lady Vanishes, it's a fascinating ringside seat at an important moment in film history. And then there's Crook's Tour, a fun 1941 feature comedy vehicle for Charters and Caldicott, the two characters played by Radford and Wayne (they'd been such a hit in The Lady Vanishes that audiences demanded more of them, leading to a long-term teaming in film and radio). All good--but Lady itself is the ride you'll be returning to again and again. --Robert Horton