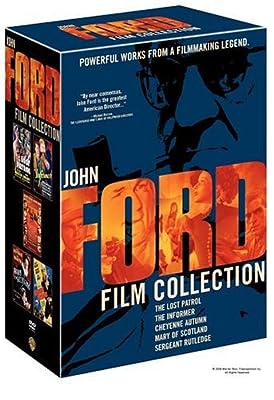 Price: $59.92
As of 2022-11-30 09:13:02 UTC (more info)
Product prices and availability are accurate as of 2022-11-30 09:13:02 UTC and are subject to change. Any price and availability information displayed on http://www.amazon.com/ at the time of purchase will apply to the purchase of this product.
Availability: Not Available - stock arriving soon
Buy Now from Amazon
Product Information (more info)
CERTAIN CONTENT THAT APPEARS ON THIS SITE COMES FROM AMAZON SERVICES LLC. THIS CONTENT IS PROVIDED 'AS IS' AND IS SUBJECT TO CHANGE OR REMOVAL AT ANY TIME.

WHV celebrates on of the true masters of American cinema with the release of The John Ford Collection. Four-time Academy Award Winning director John Ford is perhaps best known for his Westerns and collaborations with John Wayne, however, this Ford collection runs the gamut of genres and shows the diversity and genius of John Ford at his most impressive. Featured here will be the DVD debuts of five classic titles - all will be exclusive to the five-disc boxed set.

John Ford remains the consensus choice as America's greatest director, and his critical eminence dates from two films in this set. By 1934 he had been directing for 17 years, building a solid reputation as a Hollywood professional with maybe the best eye in the movie business. With The Lost Patrol (1934) and The Informer (1935)--made for RKO rather than his accustomed studio base, Fox--he took a decisive step toward establishing himself as a personal, at least semi-independent artist. Both films were stark dramas free of box-office compromise, glib heroics, or any expectation of facile happy endings. They were also more relentlessly stylized than anything Ford had done before ... which both distinguished them in their day and left them vulnerable to dating when some of their experimentation proved rather dead-ended.

The Lost Patrol began Ford's association with producer Merian C. Cooper, a partnership that would lead to the independent production company Argosy and the making of such fine, ultrapersonal films as The Quiet Man, The Searchers, and Ford's celebrated cavalry trilogy. The story, by Philip MacDonald, concerns a handful of British soldiers cornered at an oasis in the Mesopotamian Desert (now Iraq) during World War I and slowly decimated by an unseen enemy. The strong visuals--baking sun, the undulating vastness of the dunes, the drift of ghostly mirages--befit a crucible of character-testing, with an unnamed Sergeant (Victor McLaglen) striving to keep at least one man alive as desperation, madness, and implacable Arab snipers take their toll. This DVD release restores six minutes of footage cut for a 1949 rerelease and rarely seen since.

Ford won the first of his four best-director Oscars for The Informer, an intense tale of "one night in strife-torn Dublin, 1922" when a slow-witted I.R.A. strongman named Gypo Nolan sells out his best friend for 20 British pounds. On a budget that obliged him to obscure canvas sets with deep shadows and a persistent fog that underscores Gypo's mental and spiritual confusion, Ford created a visual world akin to the German Expressionist classics of the 1920s. But the film's inventive use of sound and an ambitious music score (by Max Steiner) commingling leitmotifs for half a dozen key characters also encouraged '30s critics to hail it as the first classic of the sound era. That was overstating it (and more than a little amnesiac on the critics' part!). Overstated, too, was Ford's relentless Christ symbolism paralleling Gypo's betrayal to that of Judas. Still, Victor McLaglen's portrayal of the title character remains a triumph (McLaglen won an Oscar as well), and the film abounds in brilliant strokes: the silhouette of a British soldier shining his flashlight on the wanted poster of Gypo's friend, while Gypo lurks just outside the beam; the giant Nolan forever knocking his head on hanging signs or seeming to be crushed by low ceilings; the cacophony of cries and gunfire, and then crashing silence, as the Black and Tan raid the I.R.A. rebel's home. Initially overrated, then relegated to museum status, The Informer awaits rediscovery as a dynamic motion picture.

The John Ford Collection includes one more mid-'30s RKO endeavor, Mary of Scotland (1936). Although handsome, this adaptation of a Maxwell Anderson blank-verse play about Queen Elizabeth's northern rival never finds credible footing as a movie. Andrew Sarris is dead right in lamenting Ford's version of Mary, Queen of Scots, as "a madonna of the Scottish moors"--Katharine Hepburn, inevitably. The most interesting thing about the production is the offscreen story, that Ford and Hepburn fell passionately in love, yet (perhaps) resisted becoming lovers.

From there we leap to the 1960s and two Westerns made under the aegis of Warner Bros. (Warner now owns the RKO library, hence this rather arbitrary set.) Sergeant Rutledge (1960) has markedly improved with age, with what once seemed creaky dramaturgy now playing as bold stylization. Using a jagged flashback structure occasioned by a court-martial at a Southwest outpost, Ford took an unflinching look at the legacy of race in America. The then-unknown black actor Woody Strode has a showcase role as a magnificent "Buffalo soldier" accused of the rape-murder of his commanding officer's blond, white daughter and the murder of the commandant himself. Unfortunately, Ford's once-masterly handling of character actors had grown lax, and he indulged some tedious bombast from Willis Bouchey and Carleton Young as the presiding judge and prosecutor, respectively; and Jeffrey Hunter, however effective in The Searchers, made a weak protagonist as Rutledge's defense counsel. But the veteran cameraman Bert Glennon almost winds things back to Stagecoach days, occasionally turning the film's Technicolor to very nearly black and white.

Another debt to race relations is addressed in Cheyenne Autumn (1964), a beautiful title to grace John Ford's final Western. The film has moments of grandeur as Ford attempts at long last to "tell the story from the Indians' point of view," and it's a pleasure to report that William H. Clothier's majestic Technicolor compositions have been restored to their Panavision dimensions on the DVD. Ford is unambiguously supportive of the Cheyennes' resolve to bolt their reservation in the desert Southwest and trek north to their ancestral lands. By contrast, most of white society, the military, the bureaucracy, and the sensationalist press are portrayed as insensitive, foolish, or hateful. However, the Cheyenne are nobly wooden, with all key roles played by non-Indians: Ricardo Montalban, Gilbert Roland, Sal Mineo, Victor Jory, and Dolores Del Rio (breathtakingly beautiful as ever). As for point of view, it's sympathetic cavalry officer Richard Widmark and Quaker missionary Carroll Baker through whose eyes most of the epic narrative unfolds. --Richard T. Jameson