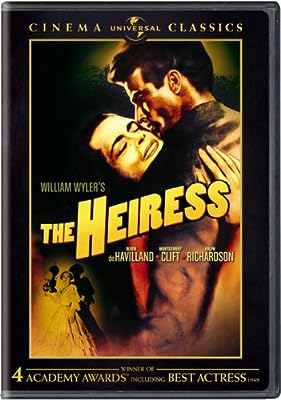 Price: $8.74
As of 2022-11-29 19:56:43 UTC (more info)
Product prices and availability are accurate as of 2022-11-29 19:56:43 UTC and are subject to change. Any price and availability information displayed on http://www.amazon.com/ at the time of purchase will apply to the purchase of this product.
Availability: Not Available - stock arriving soon
Buy Now from Amazon
Product Information (more info)
CERTAIN CONTENT THAT APPEARS ON THIS SITE COMES FROM AMAZON SERVICES LLC. THIS CONTENT IS PROVIDED 'AS IS' AND IS SUBJECT TO CHANGE OR REMOVAL AT ANY TIME.

Academy Award winner Olivia De Havilland and Montgomery Clift light up the screen in this spellbinding, landmark drama. De Havilland is Catherine Sloper, an aristocratic young woman living under the scrutiny of her malevolent father. When a handsome but penniless suitor proposes, her father believes he could only be after her vast estate and threatens disinheritance. Can she be rich in love and money? Based on the stage version of Henry James' renowned novel Washington Square, this is the "****" (Leonard Maltin) winner of four Academy Awards, featuring an all-new, digitally remastered picture. A masterpiece of love, deception and betrayal, The Heiress remains a shining example of a true cinematic achievement!

Olivia de Havilland's Oscar®-winning performance in The Heiress is so good that even hard-to-please critic Pauline Kael hailed it as de Havilland's "finest work ever." Like director William Wyler's previous masterpiece The Best Years of Our Lives, this tightly controlled drama is an all-time classic (it was added to the Library of Congress's National Film Registry in 1996), and as Turner Classic Movies host Robert Osborne observes in his DVD introduction, its reputation has steadily improved with the passage of time. It was de Havilland who sought the services of director William Wyler for this superlative film adaptation of Henry James' 1881 novel Washington Square, after director Lewis Milestone urged her to see the acclaimed stage adaptation by married playwrights Ruth and Augustus Goetz. De Havilland had already won her first Oscar (for her role in the 1946 drama To Each His Own), and recognized a prestigious opportunity when she saw one. Wyler enthusiastically agreed, and The Heiress was fast-tracked for production in early 1949. Released on October 6 of that year, the film eventually earned eight Academy Award nominations, winning the Oscar® for Best Actress, Art Direction, Costume Design, and Music (the last for Aaron Copland's splendid score). When Martin Scorsese was preparing to film The Age of Innocence in 1992, he cited Wyler's film as a primary influence. (Washington Square was filmed again in 1997, with its original title and Jennifer Jason Leigh as Catherine.)

De Havilland is heartbreaking, docile, victimized, and ultimately cruel as Catherine Sloper, a plain-looking aristocrat who stands to inherit a fortune from her ailing physician father (Ralph Richardson), as well as his well-meaning but cold-hearted demeanor. Dr. Sloper disapproves of Catherine's passionate suitor Morris Townsend (Montgomery Clift, perfectly cast), certain that the penniless young man has proposed marriage to win Catherine's inheritance. Catherine's too much in love to consider this potential betrayal, and when circumstances lead her to misinterpret Morris's intentions, The Heiress reaches an unforgettable conclusion that brilliantly supports the richly psychological nuance that Wyler brings to the preceding romance. Universal's "Cinema Classics" DVD is skimpy on extras, but Osborne's introduction is informative (as always), and despite a grainy quality of some scenes (typical with films of this vintage), the DVD transfer impeccably captures the mood-setting excellence of Leo Tover's flawless cinematography. The film's original theatrical trailer is also included. --Jeff Shannon