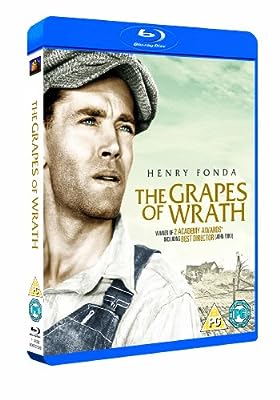 Price: $10.35
Availability: Not Available - stock arriving soon
Buy Now from Amazon
Product Information (more info)
CERTAIN CONTENT THAT APPEARS ON THIS SITE COMES FROM AMAZON SERVICES LLC. THIS CONTENT IS PROVIDED 'AS IS' AND IS SUBJECT TO CHANGE OR REMOVAL AT ANY TIME.

Nominated for seven Academy Awardsr including Best Picture, and Winner of two, including Best Director for John Ford. This American classic based on John Steinbeck's Pulitzer Prize-winning novel follows Tom Joad (Henry Fonda in an Oscarr-Nominated role) and his family as they escape the Depression-era Oklahoma dust bowls for the promised land of California. But the arduous trip and harsh living conditions offer little hope, and family unity proves as daunting a challenge as any other they face.