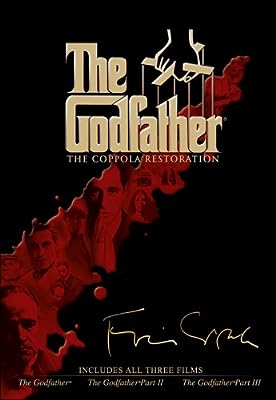 Price: $22.22
As of 2022-11-30 12:18:35 UTC (more info)
Product prices and availability are accurate as of 2022-11-30 12:18:35 UTC and are subject to change. Any price and availability information displayed on http://www.amazon.com/ at the time of purchase will apply to the purchase of this product.
Availability: Not Available - stock arriving soon
Buy Now from Amazon
Product Information (more info)
CERTAIN CONTENT THAT APPEARS ON THIS SITE COMES FROM AMAZON SERVICES LLC. THIS CONTENT IS PROVIDED 'AS IS' AND IS SUBJECT TO CHANGE OR REMOVAL AT ANY TIME.

Throughout his long, wandering, often distinguished career Francis Ford Coppola has made many films that are good and fine, many more that are flawed but undeniably interesting, and a handful of duds that are worth viewing if only because his personality is so flagrantly absent. Yet he is and always shall be known as the man who directed the Godfather films, a series that has dominated and defined their creator in a way perhaps no other director can understand. Coppola has never been able to leave them alone, whether returning after 15 years to make a trilogy of the diptych, or re-editing the first two films into chronological order for a separate video release as The Godfather Saga. The films are our very own Shakespearean cycle: they tell a tale of a vicious mobster and his extended personal and professional families (once the stuff of righteous moral comeuppance), and they dared to present themselves with an epic sweep and an unapologetically tragic tone. Murder, it turned out, was a serious business. The first film remains a towering achievement, brilliantly cast and conceived. The entry of Michael Corleone into the family business, the transition of power from his father, the ruthless dispatch of his enemies--all this is told with an assurance that is breathtaking to behold. And it turned out to be merely prologue; two years later The Godfather, Part II balanced Michael's ever-greater acquisition of power and influence during the fall of Cuba with the story of his father's own youthful rise from immigrant slums. The stakes were higher, the story's construction more elaborate, and the isolated despair at the end wholly earned. (Has there ever been a cinematic performance greater than Al Pacino's Michael, so smart and ambitious, marching through the years into what he knows is his own doom with eyes open and hungry?) The Godfather, Part III was mostly written off as an attempted cash-in, but it is a wholly worthy conclusion, less slow than autumnally patient and almost merciless in the way it brings Michael's past sins crashing down around him even as he tries to redeem himself. --Bruce Reid

On the DVD
People used to say this was Frank Sinatra's world, and the rest of us just lived in it. After watching the multiple special features in the box set The Godfather: Coppola Restoration, one might conclude it's actually time for a cultural and historical revision: This is the Corleone family's world. The rest of us better tread lightly. Actually, the point of the half-dozen or so features crammed onto a disc accompanying the beautifully restored The Godfather, The Godfather II and The Godfather III, is that The Godfather movies have penetrated popular culture in such a deep and meaningful way that they are second-nature to everything. David Chase, creator of and writer on The Sopranos, for example, describes in the featurette "Godfather World" that his hit HBO series was intended to be the story of the first generation of mobsters actually influenced by Francis Ford Coppola's hit trilogy. Joe Mantegna calls the three films "the Italian Star Wars." (Mantegna co-stars in The Godfather III.) Alec Baldwin says no matter what one is doing, one is compelled to stop and watch the films if they're on television. Richard Belzer calls the films "a religion."

And so on. A number of people similarly testify in "Godfather World" to the importance and ubiquitousness of The Godfather and its sequels in American life. There's no point in arguing, so its best to move on to the other featurettes, including "The Masterpiece That Almost Wasn't," reviewing in detail much of what has been said about Paramount's mistreatment of Coppola, about casting fights (Steve McQueen as Michael?), about the studio's assumption they were getting a quick-and-dirty B-movie, and about producer Robert Evans' determination to keep his choice of director and unlikely actors under his wing. Fresh information within the special features, however, begins with "… When the Shooting Stopped," a fine study of post-production on The Godfather, with several surprising and fascinating facts. Among emerging details is an explanation of why Michael Corleone's scream toward the end of The Godfather III is silenced out. (Hint: it was meant to be the inverse of a sound effect in the first movie.) "Emulsional Rescue: Revealing The Godfather" talks about the painstaking work of restoring the first two films, beginning with a phone call from Coppola to Steven Spielberg (after the latter's DreamWorks studio became part of the Viacom family) asking if he'd request money from Paramount for restoration work. "The Godfather On the Red Carpet is a negligible series of fawning statements about the movie from hot young actors, while "Four Short Films" are brief and enjoyable takes on different aspects of The Godfather's impact on modern living. --Tom Keogh