The Mel Brooks Collection (Blazing Saddles / Young Frankenstein / Silent Movie / Robin Hood: Men in Tights / To Be or Not to Be / History of the World, Part 1 / The Twelve Chairs / High Anxiety) 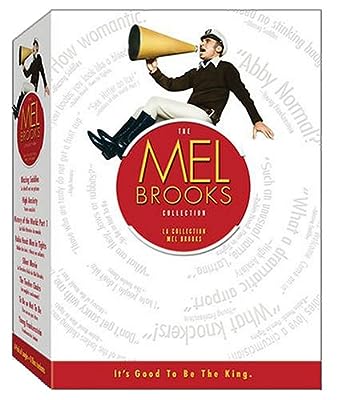 Price: $59.98
As of 2022-12-04 09:54:01 UTC (more info)
Product prices and availability are accurate as of 2022-12-04 09:54:01 UTC and are subject to change. Any price and availability information displayed on http://www.amazon.com/ at the time of purchase will apply to the purchase of this product.
Availability: Not Available - stock arriving soon
Buy Now from Amazon
Product Information (more info)
CERTAIN CONTENT THAT APPEARS ON THIS SITE COMES FROM AMAZON SERVICES LLC. THIS CONTENT IS PROVIDED 'AS IS' AND IS SUBJECT TO CHANGE OR REMOVAL AT ANY TIME.

INCLUDES: SILENT MOVIE, ROBIN HOOD-MEN IN TIGHTS, BLAZING SADDLES, HIGH ANXIETY, HISTORY OF THE WORLD PART 1, TO BE OR NOT TO BE, TWELVE CHAIRS, YOUNG FRANKENSTEIN.

There are plenty of belly laughs in The Mel Brooks Collection, an eight-disc set of most of the director-writer-actor's best-known films. Four of them--Silent Movie, High Anxiety, To Be or Not to Be, and Robin Hood: Men with Tights--are making their debut on DVD, while a fifth, The Twelve Chairs, was briefly available as a non-anamorphic DVD from Image Entertainment (all the DVDs in this set are anamorphically enhanced for widescreen TVs). That means you can sample a 23-year stretch of Brooks's outrageous and affectionate spoofing of everything from movies to popular legends to movies to historical figures to, hey! more movies.

The earliest film, The Twelve Chairs (1970), is the least known, but is one of the funniest, helped greatly by a good story (adapted from a 1920s Russian tale) and the casting of Ron Moody and Frank Langella as treasure hunters. Young Frankenstein and Blazing Saddles followed in 1974. The former, a spoof of horror films, is easily one of the top two or three funniest movies of all time, and the latter is justly famous for its often-tasteless send-up of Western cliches. Silent Movie (1976) is just what the title describes, with its only word of dialogue spoken from the least-likely source, and High Anxiety (1977) pays tribute to the work of Alfred Hitchcock. History of the World, Part 1 (1981) mocks historical events and epics, and To Be or Not to Be (1983) is a remake of Ernst Lubitsch's 1942 classic of the same name (it's also the only film in the set for which Brooks didn't receive writing and directing credit). By this time, Brooks was more actively taking the leading roles himself (rather than the bit parts), and unfortunately relying less on his topnotch ensemble of recurring players, which included Gene Wilder, Madeline Kahn, Cloris Leachman, Harvey Korman, and Dom DeLuise. But he does use a new ensemble (including Cary Elwes and, in his film debut, Dave Chappelle), for Robin Hood: Men in Tights (1993), the feature-length spin on the same hero Brooks had spoofed in his short-lived 1975 television series When Things Were Rotten.

Bonus features are minor. In addition to an HBO featurette on Men in Tights, there's a featurette and interviews on To Be or Not to Be and all the features (Brooks commentary, deleted scenes, interviews, etc.) that were on the original release of Young Frankenstein. Note that while rights issues kept The Producers, Spaceballs, and other films out of this set, 20th Century Fox was able to use Warner Bros.' Blazing Saddles. The features on that disc, however, are the ones that were on the 1997 DVD release, not the 2004 anniversary reissue. Regardless, the set's price for this many films is low, and because it has so many films new to DVD, Brooks fans will want to pick this up faster than they can say... "Frau Blücher!" --David Horiuchi