The Cranes are Flying (The Criterion Collection) 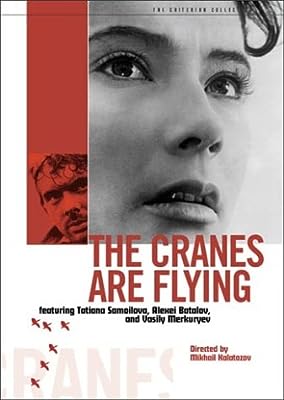 Price: $22.99
As of 2022-10-07 18:57:11 UTC (more info)
Product prices and availability are accurate as of 2022-10-07 18:57:11 UTC and are subject to change. Any price and availability information displayed on http://www.amazon.com/ at the time of purchase will apply to the purchase of this product.
Availability: Not Available - stock arriving soon
Buy Now from Amazon
Product Information (more info)
CERTAIN CONTENT THAT APPEARS ON THIS SITE COMES FROM AMAZON SERVICES LLC. THIS CONTENT IS PROVIDED 'AS IS' AND IS SUBJECT TO CHANGE OR REMOVAL AT ANY TIME.

Mikhail's Kaltozov's brilliant The Cranes are Flying is a landmark film, a fresh and liberating story that is considered not only one of the very first but also one of the very best of the post-Stalin cinema. The film tells a simple and old fashioned story about a patriotic and heroic boy who volunteers to defend his homeland, leaving his lover alone to wait for his inevitable return while he is sent to the front lines. When the film was released it became an international success winning the Palme d'Or at Cannes and being hailed as a revelation for the Soviet cinema. And yet even today contemporary viewers will find the film just as equally profound and powerful as viewers did when the film was first released, because it explores such universal and timeless themes that men go through when away from their loved ones, and what women go through when helplessly waiting for their return.

Veronica and Boris are blissfully in love, until the eruption of World War II tears them apart. Boris is sent to the front lines...and then communication stops. Meanwhile, Veronica tries to ward off spiritual numbness while Boris' draft-dodging cousin makes increasingly forceful overtures. Winner of the Palme d'Or at the 1958 Cannes Film Festival, The Cranes are Flying is a superbly crafted drama, bolstered by stunning cinematography and impassioned performances.

Mikhail Kalatozov's luscious portrait of love and loss during World War II stars almond-eyed beauty Tatyana Samojlova and handsome Aleksei Batalov as moony-eyed young lovers whose innocent romance is shattered by war. When the idealistic boy volunteers for service, his draft-dodging cousin steals the despondent girl by brute force, yet she never gives up on her true love, even when he's reported dead. Kalatozov's patriotic paean to fallen soldiers and home-front heroes is an undeniably sentimental melodrama suffused with lush images and lyrical sequences, a kind of cinematic poetry unseen in Soviet cinema since the experimentation and optimism of the silent days. Produced during the "thaw" following Stalin's repressive reign, it won the Palme d'Or prize at the 1958 Cannes Film Festival and set Kalatozov on the road to more ambitious expressions of Soviet idealism in the modern world, culminating in his masterpiece, I Am Cuba. --Sean Axmaker

When Stalin's death occurred in 1953 following the Khrushchev's denunciation of the Twentieth Communist Party Congress in February 1956, that resulted in what many called a 'thaw' which was a feeling that occurred throughout the public and culture of the Soviet Union. Because of this thaw, Soviet cinema was finally able to to release a film like Kaltozov's The Cranes are Flying, which abandoned the monotonous cliches and optimism of the Stalin era and represented the horrific and traumatic reality of what the Soviet people had to endure through World War II. What makes The Cranes Are Flying especially extraordinary is the beautiful handheld camerawork which was done by Sergei Urasevsky. Some of the most beautiful sequences in the film involve the love stricken Veronica as she weaves in and out of traffic frantically searching for her loved one, excitingly dashes up a winding staircase and rushes alongside a moving train.