Ballad of a Soldier (The Criterion Collection) 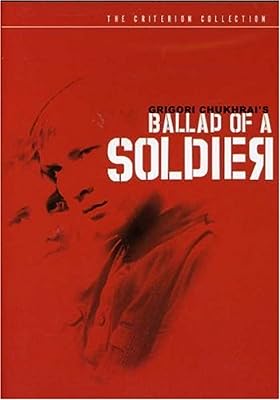 Price: $22.99
As of 2022-10-07 17:59:43 UTC (more info)
Product prices and availability are accurate as of 2022-10-07 17:59:43 UTC and are subject to change. Any price and availability information displayed on http://www.amazon.com/ at the time of purchase will apply to the purchase of this product.
Availability: Not Available - stock arriving soon
Buy Now from Amazon
Product Information (more info)
CERTAIN CONTENT THAT APPEARS ON THIS SITE COMES FROM AMAZON SERVICES LLC. THIS CONTENT IS PROVIDED 'AS IS' AND IS SUBJECT TO CHANGE OR REMOVAL AT ANY TIME.

Russian soldier Alyosha Skvortsov is granted a visit with his mother after he singlehandedly fends off two enemy tanks. As he journeys home, Alyosha encounters the devastation of his war-torn country, witnesses glimmers of hope among the people, and falls in love. With its poetic visual imagery, Grigori Chukhrai's Ballad of a Soldier is an unconventional meditation on the effects of war, and a milestone in Russian cinema.

Grigory Chukhraj's poetic odyssey of an accidental hero on a six-day pass is a sentimental journey through the ideals of the Soviet state in World War II. Vladimir Ivashov is the fresh-faced signalman whose trip from the Russian front to visit his white-haired mother becomes a series of detours as he stops to help the loyal comrades, fellow soldiers, and salt-of-the-earth civilians (as well as a few shirkers and scoundrels) he meets along the way. On a transport train he even falls in love with a pretty young stowaway, a feisty blond girl-next-door on her way to visit a wounded boyfriend. Delicately photographed and gently paced, this deliriously romantic road movie is undeniably Soviet in its celebration of patriotism and collectivism, but Chukhraj transcends politics with delightfully vivid characters and a deft mix of comedy, melodrama, and romance. --Sean Axmaker