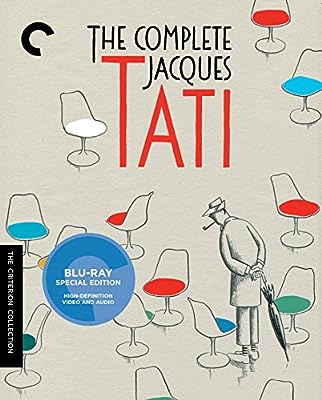 Price: $124.95
Availability: Not Available - stock arriving soon
Buy Now from Amazon
Product Information (more info)
CERTAIN CONTENT THAT APPEARS ON THIS SITE COMES FROM AMAZON SERVICES LLC. THIS CONTENT IS PROVIDED 'AS IS' AND IS SUBJECT TO CHANGE OR REMOVAL AT ANY TIME.

Though he made only a handful of films, director, writer, and actor Jacques Tati ranks among the most beloved of all cinematic geniuses. With a background in music hall and mime performance, Tati steadily built an ever-more-ambitious movie career that ultimately raised sight-gag comedy to the level of high art. In the surrogate character of the sweet and bumbling, eternally umbrella-toting and pipe-smoking Monsieur Hulot, Tati invented a charming symbol of humanity lost in a relentlessly modernizing modern age. This set gathers his six hilarious features—Jour de feÌ‚te, Monsieur Hulot’s Holiday, Mon oncle, PlayTime, Trafic, and Parade—along with seven delightful Tati-related short films.

Jacques Tati is one of the most creative and audacious visionaries of all time, and has directed some of the most entertaining and charming comedies. And yet, his comedies aren’t necessarily full of absolute hilarity or laugh out loud gags. Tati brings us much more than that, giving us moments of nostalgia, memory, fondness and of good cheer. He presents to the audience a rare, odd, and amusing affection for people and of human nature. Jacques Tati’s brilliance in slapstick and physical comedy has prompted many fans and critics over the years to compare his work to the silent classics of Charlie Chaplin and Buster Keaton.