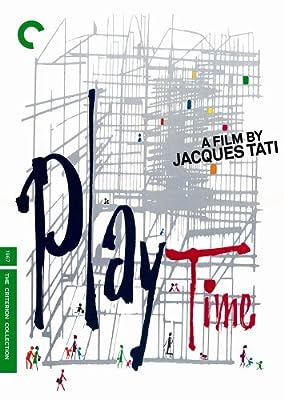 Jacques Tati's gloriously choreographed, nearly wordless comedies about confusion in the age of technology reached their creative apex with Playtime. For this monumental achievement, a nearly three-year-long, bank-breaking production, Tati again thrust the endearingly clumsy, resolutely old-fashioned Monsieur Hulot, along with a host of other lost souls, into a bafflingly modernist Paris. With every inch of its superwide frame crammed with hilarity and inventiveness, Playtime is a lasting testament to a modern age tiptoeing on the edge of oblivion. Part of the Criterion Collection.

There's never been, and never will be, another comedy like Playtime. Three years in the making, French comedy master Jacques Tati's 1967 classic was an epic, experimental undertaking of unprecedented scale: Requiring the lavish construction of three entire city blocks of ultra-modern buildings, it was the most expensive French film up to that time, financially ruined its creator, baffled many viewers and critics when it was finally released after numerous delays, and is now regarded as Tati's undisputed masterpiece. Once again, Tati plays his comedic alter ego, the hapless M. Hulot (first seen in 1953's Mr. Hulot's Holiday), seen here as a befuddled pawn on a gigantic chessboard (metaphorically speaking) of modern conformity. He's simply trying to get to an appointment, but in the film's astonishing mock-Parisian landscape of antiseptic steel, glass, and plastic, Tati's resonant theme of contemporary confusion is fully expressed through meticulous use of framing and space--so effectively, in fact, that critic Jonathan Rosenbaum (in an accompanying essay) suggests that the film's dazzling "Royal Garden" sequence "may be the most formidable example of mise-en-scène in the history of cinema." With M. Hulot taking a back-seat to the film's breathtaking accumulation of visual details, Playtime (or, if you prefer, Play Time) rewards multiple viewings, revealing something new every time in its widescreen canvas of subtle gags and delirious eccentricity. Although journalist Art Buchwald provided English dialogue for the film, Playtime bears closer kinship to silent comedy, with universal humor and a musical soundtrack that's as essential as any of the visuals. Tati (1908-1982) never recovered from the film's financial failure, but happily, he lived long enough to see Playtime receive its much-deserved critical re-appraisal. --Jeff Shannon