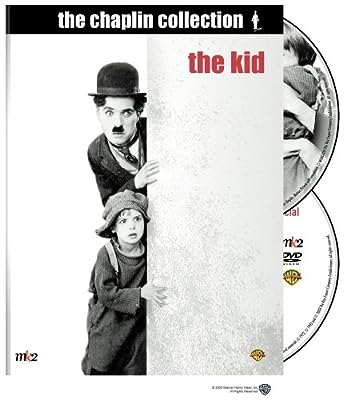 Price: $19.90
As of 2022-10-04 14:32:28 UTC (more info)
Product prices and availability are accurate as of 2022-10-04 14:32:28 UTC and are subject to change. Any price and availability information displayed on http://www.amazon.com/ at the time of purchase will apply to the purchase of this product.
Availability: Not Available - stock arriving soon
Buy Now from Amazon
Product Information (more info)
CERTAIN CONTENT THAT APPEARS ON THIS SITE COMES FROM AMAZON SERVICES LLC. THIS CONTENT IS PROVIDED 'AS IS' AND IS SUBJECT TO CHANGE OR REMOVAL AT ANY TIME.

For the first time as a filmmaker, Chaplin stepped into feature-length storytelling with this tale of the down- but-never-out Tramp (Chaplin) and the adorable ragamuffin (6-year-old Jackie Coogan) who, rescued as a foundling and raised in the School of Hard Knocks by the Tramp, is his inseparable sidekick. Memorable scenes include a lesson in table manners, the bully brawl and the Tramp's angelic dream. The Kid earns its wings.

The Kid is one of the purest expressions of Charlie Chaplin's art on film. It unites Chaplin with a boy he had spotted in a vaudeville act, 6-year-old Jackie Coogan--whose life would lead to the child-protective Coogan Act and a role as Uncle Fester on TV. The story has the Tramp adopting an abandoned waif and teaching him streetwise survival skills. The gags are flawless, but for Chaplin the huge advance (other than a running time longer than his two-reelers) was the exploration of a rich vein of sentiment; the emotionally wrenching separation of the Tramp and the Kid is probably the most Dickensian sequence ever captured on film. Chaplin drew on his own rough childhood for the material (and may have been inspired by the death of an infant son immediately before beginning the project). Jackie Coogan's gift for mimicry allowed him to replicate Chaplin's exacting direction, making him the perfect Chaplin co-star. --Robert Horton