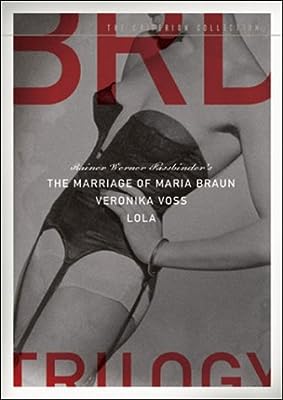 Price: $79.95
As of 2021-03-02 20:43:14 UTC (more info)
Product prices and availability are accurate as of 2021-03-02 20:43:14 UTC and are subject to change. Any price and availability information displayed on http://www.amazon.com/ at the time of purchase will apply to the purchase of this product.
Availability: Not Available - stock arriving soon
Buy Now from Amazon
Product Information (more info)
CERTAIN CONTENT THAT APPEARS ON THIS SITE COMES FROM AMAZON SERVICES LLC. THIS CONTENT IS PROVIDED 'AS IS' AND IS SUBJECT TO CHANGE OR REMOVAL AT ANY TIME.

It is the year 1943 and the groom is a soldier named Hermann Braun who must return to the front that very next morning, leaving his new wife Maria Braun now alone to survive in Post war Germany. Within time Maria will begin to use her beauty, sexuality and brains to survive the horrors of the war while her husband is off fighting. She will have multiple affairs with several men and will be bluntly honest to her lovers that she is a married woman who will always be waiting for the return of her husband. The story follows Maria's journey from about 1946 to the mid-1950s and within that time she will manipulate her boss by using sex to have him support her financially. Many critics have labeled Rainer Werner Fassbinder's The Marriage of Maria Braun as a story of sexual politics, which explores the power structures of the female sex, and how a woman like Maria learns to adapt and take on the roles of men during a time of war, to survive and thrive in the postwar years of Germany.

There is at least one certifiable masterpiece in Rainer Werner Fassbinder's BRD Trilogy, and one could argue that all three films qualify for that honor. Conceived as a series of sociopolitical melodramas set during West Germany's "economic miracle" of post-war recovery (roughly 1947-60), these exquisitely crafted films found the prolific Fassbinder (1945-82) near the end of his astounding career and at the height of his creative powers, depicting post-war Germany as a land of repressed memory and surging capitalism, repressively avoiding any connection to the horrors of its Nazi past. Women were Fassbinder's conduit to analyzing the BDR (Bundesrepublik Deutchland) and its effect on the German character, resulting in three of the most remarkable female characters ever committed to film.

As noted in an affectionate commentary track by Fassbinder's friend and fellow director Wim Wenders, The Marriage of Maria Braun (1979) is Fassbinder's undisputed masterwork, a critical and box-office triumph that fulfilled Fassbinder's goal of creating a "German Hollywood melodrama" in the tradition of his director-hero, Douglas Sirk. Beautifully shot by Michael Ballhaus (who advanced to brilliant collaborations with Martin Scorsese), it stars Hanna Schygulla in her signature role as a newlywed whose missing husband returns in the mid-'50s, just as she's reinventing herself through opportunism, seduction, and blind ambition--a woman, like Germany, determined to forget her miserable past, with explosively tragic results. "BRD 2" is the wickedly satirical Veronika Voss (1982), filmed in black and white (a stylistic nod to German'y's post-war thrillers) and starring Rosel Zech as a faded film star-turned-morphine addict making futile attempts to revive her career. Set in 1957, Lola ("BRD 3," 1981) is Fassbinder's homage to Josef von Sternberg's The Blue Angel, and stars Barbara Sukowa as a cabaret singer and prostitute who, like Maria Braun, is for sale to the highest bidder--in this case a straight-laced official (Armin Mueller-Stahl) who discovers the high cost of ignorance.

Taken together, these films form an impressively coherent vision, compassionate and yet brutally honest, unsentimental, and provocatively critical of post-war Germany. In the established tradition of the Criterion Collection, extensive supplements explore the depth of Fassbinder's achievement. Three commentaries, each with their own uniquely personal and/or critical perspective, are among the finest Criterion has ever recorded. Interviews with Schygulla, Zech, Sukowa, and many of Fassbinder's closest collaborators pay latter-day tribute to Fassbinder and his extended family of on- and off-screen talent, while the 96-minute German TV documentary I Don't Just Want You to Love Me explores Fassbinder's tragically curtailed life and work through abundant film clips and interviews. A filmed 1978 interview with Fassbinder himself--at 49 minutes, the longest ever recorded--offers further insight into the psychology and chain-smoking intensity of a man who burned out from drugs and exhaustion at the age of 37. Along with the collected Adventures of Antoine Doinel, the BRD Trilogy is one of the most impressive DVD sets ever released, and a sparkling jewel in Criterion's crown. --Jeff Shannon

The remarkable German director Rainer Werner Fassbinder directed The Marriage of Maria Braun at the end of his short and brilliant career before his tragic death at the young age of 37 from heart failure resulting from a lethal interaction between sleeping pills and cocaine. His work is considered one of the large influences of the New German Cinema which included around 30 features and several television films. Most of Fassbinder's characters inhabit a tragic world of sex, money and power that usually leads them to murder, sadism and self-destruction. He's made several masterpieces during his short career but I believe The Marriage of Maria Braun to be his greatest and most poignant film. The character of Maria Braun is one of the most fascinating women in the history of the cinema, as Maria's gradual change from a desperate poor woman to a domineering wealthy beauty is quite extraordinary.