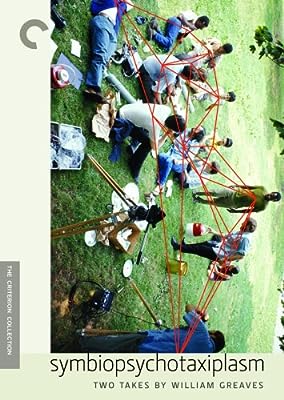 Price: $23.34
As of 2022-11-27 11:55:14 UTC (more info)
Product prices and availability are accurate as of 2022-11-27 11:55:14 UTC and are subject to change. Any price and availability information displayed on http://www.amazon.com/ at the time of purchase will apply to the purchase of this product.
Availability: Not Available - stock arriving soon
Buy Now from Amazon
Product Information (more info)
CERTAIN CONTENT THAT APPEARS ON THIS SITE COMES FROM AMAZON SERVICES LLC. THIS CONTENT IS PROVIDED 'AS IS' AND IS SUBJECT TO CHANGE OR REMOVAL AT ANY TIME.

In William Greaves’s spontaneous, one-of-a-kind fiction/documentary hybrid Symbiopsychotaxiplasm Take One, Greaves presides over a beleaguered troupe of camera and sound men in New York’s Central Park in 1967, leaving them to try and decipher exactly what it is they’re making: a strange, bickering couple enacting a break-up scenario over and over; a documentary crew filming a crew filming the crew; locals wandering casually into the frame. A multilayered and wildly entertaining deconstruction of cinema, Symbiopsychotaxiplasm defies easy description yet remains one of the most tightly focused movies ever made about making movies.

Director William Greaves, who based Symbiopsychotaxiplasm Take One on the social science term "symbiotaxiplasm," signifying that all human-involved events influence their environment and vice versa, made this sophisticated film that captures the sexual dynamics of a feuding couple in a park by filming everything that occurs around them, including dramas among the film crew. This meta-film, radically experimental for its era, paved the way for the "making-of" films so popular now, though Symbio is more editorially ambitious. Its plot is complicated by inserted footage of Greaves' crew's "mutiny" as they covertly film criticisms of the director as a way to vent frustrations about the film's conceptual logic. Patricia Ree Gilbert and Don Fellows play, among other actors, a couple fighting about the husband's latent homosexuality and the wife's wish for kids. As they hurl insults at each other on one camera, two more cameras trail the Director, the DP, vociferous crew member Bob Rosen, and random park visitors. Multiple camera angles of each scene convolute traditional filmic roles as the Director often co-opts the action. A soundtrack by Miles Davis takes over during parts when the film seems likely to crumble under its lofty constraints. This Criterion Collection release features Take Two, a film with the same premise but with different actors, and a new film by Steven Soderbergh, Take 2 1/2. Starring Greaves fan Steve Buscemi, Greaves once again ventures into Central Park to film the reunion of the same fighting couple. Take 2 1/2 is dull compared to the original, though its footage of Greaves discussing Take One at an awards ceremony provides valuable documentary information. --Trinie Dalton