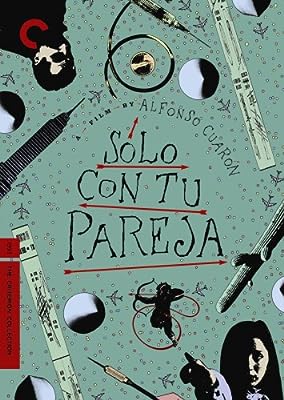 Price: $29.95
As of 2023-02-04 00:46:12 UTC (more info)
Product prices and availability are accurate as of 2023-02-04 00:46:12 UTC and are subject to change. Any price and availability information displayed on http://www.amazon.com/ at the time of purchase will apply to the purchase of this product.
Availability: Not Available - stock arriving soon
Buy Now from Amazon
Product Information (more info)
CERTAIN CONTENT THAT APPEARS ON THIS SITE COMES FROM AMAZON SERVICES LLC. THIS CONTENT IS PROVIDED 'AS IS' AND IS SUBJECT TO CHANGE OR REMOVAL AT ANY TIME.

Before Alfonso Cuarón helmed the international sensation Y tu mamá también, he made his mark on Mexican cinema with the ribald and lightning-quick contemporary social satire Sólo con tu pareja. Don Juan-ish yuppie Tomás Tomás (Daniel Giménez Cacho, from Bad Education) spends his nights juggling so many beautiful women that he can’t keep their names straight—until one of his many conquests, a spurned nurse, gives him a taste of his own medicine. Beautifully filmed in widescreen by the inimitable Emmanuel Lubezki (The New World), Cuarón’s wildly successful feature debut (which has never been released in the U.S.) gave voice to a Mexican middle-class that had remained largely unseen onscreen, and surveys contemporary urban sexual mores with style to spare.

A fast-paced romantic comedy, Sólo con tu pareja was director Alfonso Cuarón's ticket to a bright and promising future. Inspired by the classic screwball comedies of Ernst Lubitsch, this social satire (the title translates as "Only with Your Partner") was Cuarón's feature debut, but because it was a state-funded film that poked fun at Mexican culture, it was initially withheld from release by the Mexican government, only to become a critical and popular success when it was finally released in Mexico in 1991. (It wasn't released in the U.S. until 2006.) A remarkably polished debut, it offered ample proof that Cuarón was a talent to watch, as proven by the films Cuarón would later direct both in and out of Hollywood, including A Little Princess (1995), Great Expectations (1998), Y tu mamá también (2001), Harry Potter and the Prisoner of Azkaban (2004), and the near-future thriller Children of Men (2006). The talent behind those later films is fully evident here, and from a lively script by his brother Carlos, Cuarón concocts a frothy farce about a reckless playboy named Tomás (Daniel Giménez Cacho, from Almodovar's Bad Education) whose bed-hopping catches up with him when his latest conquest, a sexy nurse, falsely checks the "positive" box on his latest AIDS test to curtail Tomás's rampant womanizing.

Now wait a minute... this is a comedy with AIDS humor, from 1991? This was certainly a bold move from the Cuarón brothers, but the humor is handled with graceful style, and as Tomás grows affectionately obsessed with a gorgeous neighbor in his Mexico City apartment building, his once-thriving love life grows increasingly (and comedically) complicated. The casting is flawless, the slapstick humor is impeccably timed, and the film is technically blessed by the brilliant cinematography of Emmanuel Lubezki, who supervised this high-definition digital transfer to DVD, and who followed Cuarón on a mutual path to international acclaim. Thematically enriched by Mozart's Don Giovanni (heard throughout the soundtrack), Sólo con tu pareja can now be appreciated as a well-crafted launching pad for one of the most consistently impressive filmmakers of the early 21st century. --Jeff Shannon

On the DVD
The Criterion Collection supplements for Sólo con tu pareja are nearly as enjoyable as the film itself. "Making Sólo con tu pareja" is a 30-minute documentary (2006) featuring in-depth interviews with Alfonso and Carlos Cuarón and lead actor Daniel Giménez Cacho. Also included is Cuarteto para el fin del tiempo, a short written and directed by Alfonso Cuarón when he was a film student in 1983; another short film, Noche de bodas ("Wedding Night"), written and directed for Mexican television by Carlos Cuarón in 2000; and the original theatrical trailer for Sólo con tu pareja. In the accompanying 28-page booklet, an essay by scholar Ryan F. Long examines the film from the perspective of Mexican culture and politics, and Carlos Cuarón contributes a detailed character history of Tomás that was written so Daniel Giménez Cacho could thoroughly understand the character he was playing. (Other character profiles are available on the Criterion Collection Web site.) It's a fascinating piece of background history, demonstrating the care and detail that went into the creation of this highly enjoyable comedy. --Jeff Shannon