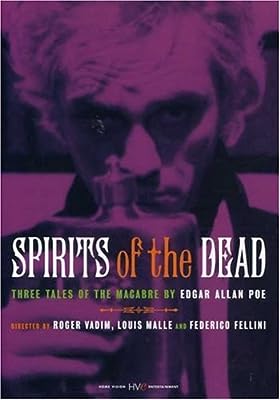 Price: $19.95
As of 2023-02-06 10:20:12 UTC (more info)
Product prices and availability are accurate as of 2023-02-06 10:20:12 UTC and are subject to change. Any price and availability information displayed on http://www.amazon.com/ at the time of purchase will apply to the purchase of this product.
Availability: Not Available - stock arriving soon
Buy Now from Amazon
Product Information (more info)
CERTAIN CONTENT THAT APPEARS ON THIS SITE COMES FROM AMAZON SERVICES LLC. THIS CONTENT IS PROVIDED 'AS IS' AND IS SUBJECT TO CHANGE OR REMOVAL AT ANY TIME.

Three giants of world cinema conspire to bring the dark prose of Edgar Allan Poe to the screen in Spirits of the Dead. Roger Vadim, Luis Malle, and Federico Fellini direct Jane and Peter Fonda, Brigitte Bardot, Alain Delon, and Terence Stamp in three separate stories of souls tormented by their own phantasmal visions of guilt, lust, and greed. In a stunning new transfer enhanced for 16X9 televisions, Home Vision Entertainment is pleased to present this marvelous volume of the macabre.

The Fire Within (The Criterion Collectio...

Eclipse Series 2: The Documentaries of L...