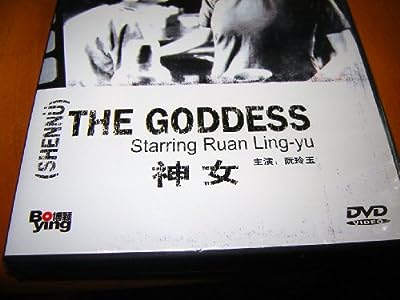 Price: $10.99
As of 2022-08-15 17:29:22 UTC (more info)
Product prices and availability are accurate as of 2022-08-15 17:29:22 UTC and are subject to change. Any price and availability information displayed on http://www.amazon.com/ at the time of purchase will apply to the purchase of this product.
Availability: Not Available - stock arriving soon
Buy Now from Amazon
Product Information (more info)
CERTAIN CONTENT THAT APPEARS ON THIS SITE COMES FROM AMAZON SERVICES LLC. THIS CONTENT IS PROVIDED 'AS IS' AND IS SUBJECT TO CHANGE OR REMOVAL AT ANY TIME.

The Goddess (Chinese: ??; pinyin: Shénn?) is a 1934 Chinese silent film released by the Lianhua Film Company (United Photoplay). It starred Ruan Lingyu in one of her final roles, and was directed by Wu Yonggang. Today The Goddess is one of the best known films of China's cinematic golden age, and has been named by director Chen Kaige as his favorite film of the 1930s The film's title has several layers of meaning. On one level, it is a description of the nameless character played by Ruan Lingyu, who is equated with a protective goddess in the film. On another level, the title refers to her character's occupation, in that the Chinese term shennü, while primarily meaning "goddess," also was an old euphemism for a prostitute.