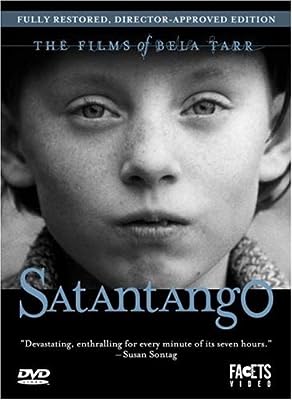 Price: $79.95
As of 2022-10-02 02:54:45 UTC (more info)
Product prices and availability are accurate as of 2022-10-02 02:54:45 UTC and are subject to change. Any price and availability information displayed on http://www.amazon.com/ at the time of purchase will apply to the purchase of this product.
Availability: Not Available - stock arriving soon
Buy Now from Amazon
Product Information (more info)
CERTAIN CONTENT THAT APPEARS ON THIS SITE COMES FROM AMAZON SERVICES LLC. THIS CONTENT IS PROVIDED 'AS IS' AND IS SUBJECT TO CHANGE OR REMOVAL AT ANY TIME.

Hungarian auteur Bela Tarr's seven-hour, black-and-white epic based on the novel by Laszlo Karsznahorkai took two years to film. The complex story follows a group of people living in a dilapidated village in post-communist Hungary. Tarr examines their standstill lives through a series of episodes told from each person's point-of-view. Winner of the Caligari Film Prize and the Ecumenical Jury Prize Special Mention at the 1994 Berlin International Film Festival. In Hungarian with optional English subtitles.

Splendor in the Grass