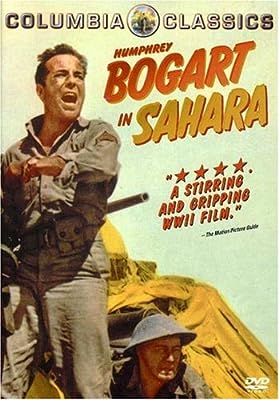 Price: $14.99
As of 2022-11-27 12:22:41 UTC (more info)
Product prices and availability are accurate as of 2022-11-27 12:22:41 UTC and are subject to change. Any price and availability information displayed on http://www.amazon.com/ at the time of purchase will apply to the purchase of this product.
Availability: Not Available - stock arriving soon
Buy Now from Amazon
Product Information (more info)
CERTAIN CONTENT THAT APPEARS ON THIS SITE COMES FROM AMAZON SERVICES LLC. THIS CONTENT IS PROVIDED 'AS IS' AND IS SUBJECT TO CHANGE OR REMOVAL AT ANY TIME.

There's plenty of top-notch, explosive action in this 1943 Bogie classic about a ragtag battalion stranded in the great African desert during World War II. After the fall of the Libyan city of Tobruk, Sergeant Joe Gunn (Humphrey Bogart) and his crew - Waco Hoyt (Bruce Bennett), Fred Clarkson (LloydBridges) and Jimmy Doyle (Dan Duryea) retreat in their tank across the Sahara. Along the way they pick up six Allied stragglers and Tambul (Rex Ingram), a Sudanese corporal and his Italian prisoner. Tambul directs the group to a desert fortress, where they hope to find desperately needed water. A detachment of German soldiers arrives and attempts to barter food for water, but Gunn and his followers refuse. When the Germans attack, Gunn leads his desert-weary men in a desperate battle, hoping that British reinforcements can arrive in time.