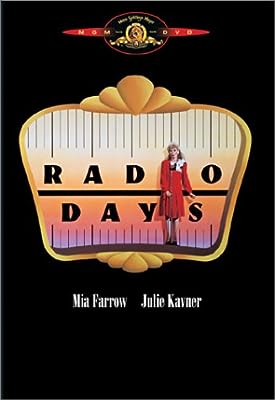 Price: $14.98
As of 2022-11-27 19:32:47 UTC (more info)
Product prices and availability are accurate as of 2022-11-27 19:32:47 UTC and are subject to change. Any price and availability information displayed on http://www.amazon.com/ at the time of purchase will apply to the purchase of this product.
Availability: Not Available - stock arriving soon
Buy Now from Amazon
Product Information (more info)
CERTAIN CONTENT THAT APPEARS ON THIS SITE COMES FROM AMAZON SERVICES LLC. THIS CONTENT IS PROVIDED 'AS IS' AND IS SUBJECT TO CHANGE OR REMOVAL AT ANY TIME.

A sweet and clever combination of anecdotes and autobiography, Radio Days draws heavily on Woody Allen's childhood. Fittingly, the unfolding episodes are woven together by music--lovely hits of the 1940s like "In the Mood" and "That Old Feeling." Some episodes are built around radio itself (like the burglars who answer the phone in a house they're burgling and win a radio contest), and others center on the life of a young Jewish boy (Seth Green, clearly playing a version of Allen himself as a child). Though light in tone, Radio Days is an ambitious re-creation not simply of an era, but of radio itself. Nowadays radio is little more than a way to sell pop tunes, but it used to transmit dreams; watching this movie, you get a taste of how inspiring this simpler medium could be. --Bret Fetzer