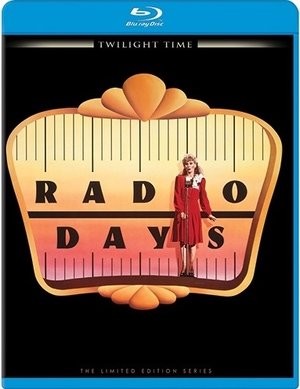 Price: $34.95
As of 2023-02-05 03:27:39 UTC (more info)
Product prices and availability are accurate as of 2023-02-05 03:27:39 UTC and are subject to change. Any price and availability information displayed on http://www.amazon.com/ at the time of purchase will apply to the purchase of this product.
Availability: Not Available - stock arriving soon
Buy Now from Amazon
Product Information (more info)
CERTAIN CONTENT THAT APPEARS ON THIS SITE COMES FROM AMAZON SERVICES LLC. THIS CONTENT IS PROVIDED 'AS IS' AND IS SUBJECT TO CHANGE OR REMOVAL AT ANY TIME.

Writer-director Woody Allen's tenderly nostalgic, joyously funny Radio Days (1987) is a vignette-packed memory piece about growing up in Brooklyn in the 1940s, obsessed with the music, entertainment, and news of the wide world brought into every household via the magic of radio. A young Allen surrogate (played by a teeny red-headed Seth Green) lives with his parents (the wonderful Julie Kavner and Michael Tucker) and extended family in the wind-swept Rockaway neighborhood, their daily routines spiced by the glamour, excitement, thrills, and even occasional doses of grim reality coming to them over the airwaves. Also starring Mia Farrow, Dianne Wiest, and Josh Mostel.