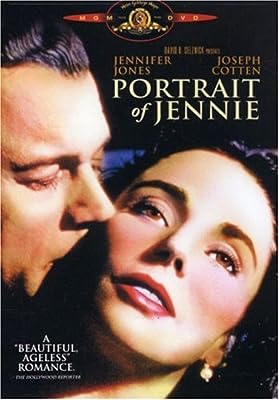 Price: $14.98
As of 2022-12-06 11:26:30 UTC (more info)
Product prices and availability are accurate as of 2022-12-06 11:26:30 UTC and are subject to change. Any price and availability information displayed on http://www.amazon.com/ at the time of purchase will apply to the purchase of this product.
Availability: Not Available - stock arriving soon
Buy Now from Amazon
Product Information (more info)
CERTAIN CONTENT THAT APPEARS ON THIS SITE COMES FROM AMAZON SERVICES LLC. THIS CONTENT IS PROVIDED 'AS IS' AND IS SUBJECT TO CHANGE OR REMOVAL AT ANY TIME.

One of the most unusual romances ever filmed, Portrait of Jennie is the picture of sumptuousperfection. Starring Joseph Cotten (Citizen Kane) and OscarÂ(r) winner* Jennifer Jones (A Farewell to Arms) in a 'sensitive, appealing performance (The Hollywood Reporter), this 'tender [and] poetic (Variety) tale is enthralling from its touching beginning to its haunting conclusion. When struggling artist Eben Adams (Cotten) meets the beautiful and mysterious Jennie (Jones), he is instantly captivated. Before long, Jennie has become his great muse and he is enjoying success and bliss beyond his dreams. But there is a price to pay for such elation, and soon Eben must face the truth about who Jennie really is. *1943: Actress, The Song of Bernadette