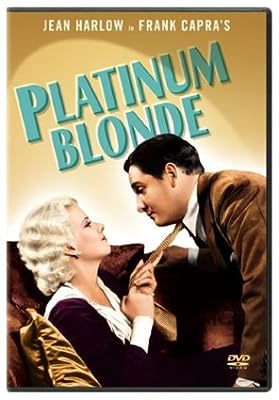 Price: $14.99
As of 2023-02-04 22:59:43 UTC (more info)
Product prices and availability are accurate as of 2023-02-04 22:59:43 UTC and are subject to change. Any price and availability information displayed on http://www.amazon.com/ at the time of purchase will apply to the purchase of this product.
Availability: Not Available - stock arriving soon
Buy Now from Amazon
Product Information (more info)
CERTAIN CONTENT THAT APPEARS ON THIS SITE COMES FROM AMAZON SERVICES LLC. THIS CONTENT IS PROVIDED 'AS IS' AND IS SUBJECT TO CHANGE OR REMOVAL AT ANY TIME.

In the film that fueled her legendary career, Jean Harlow (The Public Enemy) stars in this romantic comedy directed by Academy Award® winner Frank Capra (Best Director, It Happened One Night, 1934). Written to showcase Harlow’s talent, looks and charm, PLATINUM BLONDE is a glorious spoof of the newspaper business in New York City during the Depression. Ann Schuyler (Harlow), a wealthy socialite, meets reporter Stew Smith (Robert Williams, Devotion) and the two fall madly in love. The comedy begins as she tries to transform him from a ruffian newsman into a convincing gentleman. “Stew,” who is quick with wisecracks, is slow to realize the dangers of being a kept man. At first, he likes the idle life of the rich, but there’s trouble in paradise. Soon this “Cinderella Man” turns the social register upside down with his mocking repartee. To his rescue is Gallagher (Loretta Young, The Stranger), a sympathetic friend and co-worker at the newspaper. She comforts and consoles Stew and, in clas

This Frank Capra comedy from 1931 helped define the screwball-comedy genre that became so popular with films like It Happened One Night and The Awful Truth. In this witty romp, Jean Harlow plays an upper-crust socialite who bullies her reporter husband (Robert Williams) into conforming to her highfalutin ways. The husband chafes at the confinement of high society, though, and yearns for a creative outlet. He decides to write a play and collaborates with a fellow reporter (Loretta Young); the results are unexpectedly hilarious, especially when Young shows up at the mansion with a gaggle of boozehound reporters in tow. With snappy, ribald dialogue (allowable in those pre-Hays Code days), Capra keeps the gags flying fast and furious, taking special delight in having Williams's journalist pals rib him endlessly over his kept-man status. Platinum Blonde was a great success at the time of its release during the class-conscious Depression; for better or worse, its star Harlow was identified with the tag "platinum blonde" until her untimely death. --Jerry Renshaw

The Bitter Tea of General Yen