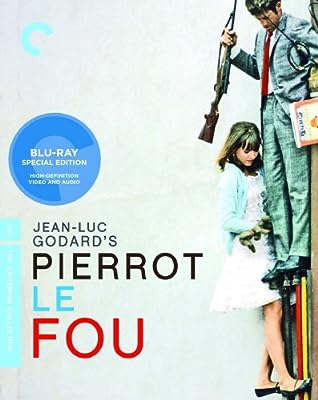 Jean-Luc Godard's Pierrot le fou is an extraordinary experience that tells the romantic story of a failed TV writer who decides to run off and leave his boring family and society friends with his children's babysitter, who are both played by the two most iconic faces of the French New Wave; Jean-Paul Belmondo and Anna Karina. The two of them decide to go on a cross-country road trip toward the Mediterranean Sea, because the woman claims to hold several underworld connections. The two rob, kill and steal to get where they're going and even though this could have easily been the predictable formulaic outlaw road film, Godard makes it his own with a collage of B-movie thriller conventions, social satire, political commentary, and beautiful primary colors.

Dissatisfied in marriage and life, Ferdinand (Jean-Paul Belmondo) takes to the road with the babysitter, his ex-lover Marianne Renoir (Anna Karina), and leaves the bourgeoisie behind. Yet this is no normal road trip: genius auteur Jean-Luc Godard's tenth feature in six years is a stylish mash-up of consumerist satire, politics, and comic-book aesthetics, as well as a violent, zigzag tale of, as Godard called them, "the last romantic couple." With blissful color imagery by cinematographer Raoul Coutard and Belmondo and Karina at their most animated, Pierrot le fou is one of the high points of the French new wave, and one last frolic before Godard moved ever further into radical cinema.

Ferdinand (Jean-Paul Belmondo) is a man who has married for money and is terribly disillusioned with his life. When forced to go to a dinner party he does not want to attend, he throws a temper tantrum and returns home early. When driving Marianne (Anna Karina), the babysitter, back home, they fall in love and decide to run away from Paris. They embark on a series of escapades that begins with running illegal arms for extra cash and runs the gamut: love, death, ennui, boat chases, murder, betrayal, revenge, lost cash, and almost anything else you can think of, and all with a sense of reality that is an interesting contrast to the typical American film. Jean-Luc Godard (Breathless, Alphaville) blends different genres with great success and achieves moments of cinematic poetry in this quasi-epic of modern malaise. Also a cameo by the Hollywood director Samuel Fuller is something to watch for. Be aware that Godard is for people seriously interested in cinematic art. --James McGrath

Godard underlines Pierrot le fou with several Hollywood genres like the film noir, the gangster film, and the musical and several theoretical references to comic books, literature and even the Vietnam War, which was escalating at the time and greatly infuriating Godard. The artistic vision of the character's love of betrayal and pain became a grim reality for Godard during the shooting of the film because by the time he finished shooting from May through July of 1965, he and his wife Anna Karina had divorced.Pierrot le fou became such an overwhelming collage of spontaneity and creative inventions, Godard became panicked on how the film would come out. He stated shortly after completing Pierrot le fou in his magazine Cahiers du cinema: "In my other films, when I had a problem I asked myself what Hitchcock would have done in my place. While making Pierrot, I had the impression that he wouldn't have known how to answer, other than 'Work it out for yourself.'"