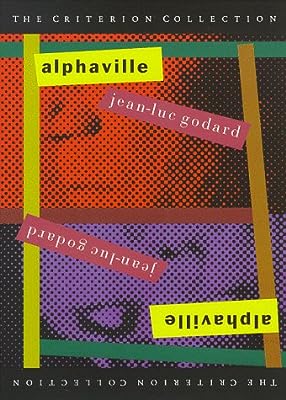 Price: $29.95
As of 2023-02-01 11:35:28 UTC (more info)
Product prices and availability are accurate as of 2023-02-01 11:35:28 UTC and are subject to change. Any price and availability information displayed on http://www.amazon.com/ at the time of purchase will apply to the purchase of this product.
Availability: Not Available - stock arriving soon
Buy Now from Amazon
Product Information (more info)
CERTAIN CONTENT THAT APPEARS ON THIS SITE COMES FROM AMAZON SERVICES LLC. THIS CONTENT IS PROVIDED 'AS IS' AND IS SUBJECT TO CHANGE OR REMOVAL AT ANY TIME.

A cockeyed fusion of science fiction, pulp characters, and surrealist poetry, Godard's irreverent journey to the mysterious Alphaville remains one of the least conventional films of all time. Eddie Constantine stars as intergalactic hero Lemmy Caution, on a mission to kill the inventor of fascist computer Alpha 60. Criterion's edition of this seminal film features a new digital transfer.

As the French New Wave was reaching its maturity and filmgoing had evolved as a favorite pastime of intellectuals and urban sophisticates, along came Jean-Luc Godard to shake up every convention and send highfalutin critics scrambling to their typewriters. 1965's Alphaville is a perfect example of Godard's willingness to disrupt expectation, combine genres, and comment on movies while making sociopolitical statements that inspired doctoral theses and left a majority of viewers mystified. Part science fiction and part hard-boiled detective yarn, Alphaville presents a futuristic scenario using the most modern and impersonal architecture that Godard could find in mid-'60s Paris. A haggard private eye (Eddie Constantine) is sent to an ultramodern city run by a master computer, where his mission is to locate and rescue a scientist who is trapped there. As the story unfolds on Godard's strictly low-budget terms, the movie tackles a variety of topics such as the dehumanizing effect of technology, willful suppression of personality, saturation of commercial products, and, of course, the constant recollection of previous films through Godard's carefully chosen images. For most people Alphaville, like many of the director's films, will prove utterly baffling. For those inclined to dig deeper into Godard's artistic intentions, the words of critic Andrew Sarris (quoted from an essay that accompanies the Criterion Collection DVD) will ring true: "To understand and appreciate Alphaville is to understand Godard, and vice versa." --Jeff Shannon