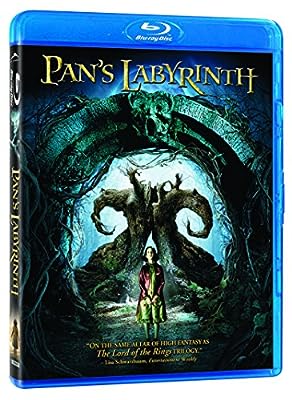 Price: $12.97
As of 2022-10-04 04:27:20 UTC (more info)
Product prices and availability are accurate as of 2022-10-04 04:27:20 UTC and are subject to change. Any price and availability information displayed on http://www.amazon.com/ at the time of purchase will apply to the purchase of this product.
Availability: Not Available - stock arriving soon
Buy Now from Amazon
Product Information (more info)
CERTAIN CONTENT THAT APPEARS ON THIS SITE COMES FROM AMAZON SERVICES LLC. THIS CONTENT IS PROVIDED 'AS IS' AND IS SUBJECT TO CHANGE OR REMOVAL AT ANY TIME.

Following a bloody civil war, young Ofelia enters a world of unimaginable cruelty when she moves in with her new stepfather, a tyrannical military officer. Armed with only her imagination, Ofelia discovers a mysterious labyrinth and meets a faun who sets her on a path to saving herself and her ailing mother. But soon, the lines between fantasy and reality begin to blur, and before Ofelia can turn back, she finds herself at the center of a ferocious battle between good and evil.

Inspired by the Brothers Grimm, Jorge Luis Borges, and Guillermo del Toro's own unlimited imagination, Pan's Labyrinth is a fairytale for adults. Ofelia (Ivana Baquero) may only be 12, but the worlds she inhabits, both above and below ground, are dark as anything del Toro has conjured. Set in rural Spain, circa 1944, Ofelia and her widowed mother, Carmen (Ariadna Gil, Belle Epoque), have just moved into an abandoned mill with Carmen's new husband, Captain Vidal (Sergi López, With a Friend like Harry). Carmen is pregnant with his son. Other than her sickly mother and kindly housekeeper Mercedes (Maribel Verdú, Y Tu Mamá También), the dreamy Ofelia is on her own. Vidal, an exceedingly cruel man, couldn't be bothered. He has informers to torture. Ofelia soon finds that an entire universe exists below the mill. Her guide is the persuasive Faun (Doug Jones, Mimic). As her mother grows weaker, Ofelia spends more and more time in the satyr's labyrinth. He offers to help her out of her predicament if she'll complete three treacherous tasks. Ofelia is willing to try, but does this alternate reality really exist or is it all in her head? Del Toro leaves that up to the viewer to decide in a beautiful, yet brutal twin to The Devil's Backbone, which was also haunted by the ghost of Franco. Though it lacks the humor of Hellboy, Pan's Labyrinth represents Guillermo Del Toro at the top of his considerable game. --Kathleen C. Fennessy

Nostalgia for the Light [Blu-ray]