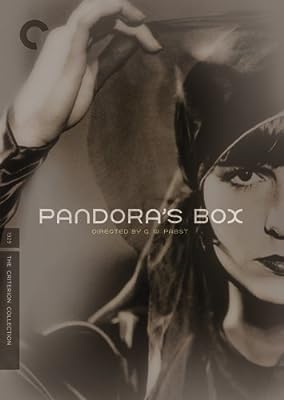 Price: $39.95
As of 2022-11-29 18:36:40 UTC (more info)
Product prices and availability are accurate as of 2022-11-29 18:36:40 UTC and are subject to change. Any price and availability information displayed on http://www.amazon.com/ at the time of purchase will apply to the purchase of this product.
Availability: Not Available - stock arriving soon
Buy Now from Amazon
Product Information (more info)
CERTAIN CONTENT THAT APPEARS ON THIS SITE COMES FROM AMAZON SERVICES LLC. THIS CONTENT IS PROVIDED 'AS IS' AND IS SUBJECT TO CHANGE OR REMOVAL AT ANY TIME.

The line that separated Louise Brooks and of the fictional character Lulu in G.W. Pabst's masterpiece Pandora's Box had begun to blur over the decades, as Lulu's impulsive and reckless characteristics in the film were greatly similar to the behavior of Brooks, and of her short time in the glamorous world of Hollywood. Brooks was known to be a person who like to party, drink way too much, and stir up way too much trouble; as in which one classic incident she drunkenly told Paramount to go to hell after asking her to come back to Hollywood and dub one of her very last silent films. Because of such reckless behavior many of Brook's celebrity friends began to turn their their back on Brook's and she unfortunately ended up burning all her bridges in Hollywood. (She even unwisely turned down Jean Harlow's role in Public Enemy). As if it was sheer fate director G.W. Pabst offered Brook's the infamous role of the naughty and immoral Lulu in Pandora's Box near the deteriorating end of Brook's career, and it is now looked at as Brook's greatest performance.

One of the masters of early German cinema, G.W. Pabst had an innate talent for discovering actresses (including Greta Garbo). And perhaps none of his female stars shone brighter than Kansas native and onetime Ziegfeld girl Louise Brooks, whose legendary persona was defined by Pabst’s lurid, controversial melodrama Pandora’s Box. Sensationally modern, the film follows the downward spiral of the fiery, brash, yet innocent showgirl Lulu, whose sexual vivacity has a devastating effect on everyone she comes in contact with. Daring and stylish, Pandora’s Box is one of silent cinema’s great masterworks, and a testament to Brooks’s dazzling individuality.

G.W. Pabst's Pandora's Box serves as a filmic window into the decadent Weimar Republic because of its tauntingly beautiful star, Louise Brooks. Brooks, encompassing the very essence of sexual allure and mystery, is iconically linked to her character, Lulu, the dancer-turned-streetwalker who captivates all men in her path with her elusive beauty. Set in Berlin, 1928, Pandora's Box is about Lulu, an aspiring star whose patron, Dr. Schön (Fritz Kortner), finds loyalty to his fiancé impossible because of Lulu's unsurpassed charm. Schön's son, Alwa, also falls in love with Lulu until a series of tragic incidents render them destitute in London, where Lulu resorts to prostitution and, in a final devastating scene, picks up her final john, Jack the Ripper. In the silent film era, Brooks's expressive face and graceful movements enabled her to epitomize a Roaring Twenties' version of feminism: innocence underpinned by sexual innuendo. Key scenes in Pandora's Box, such as when Lulu thrills at Dr. Schön's fiancé discovering he and Lulu embraced, or when Lulu's gleaming eyes mimic Jack the Ripper's polished knife blade, are radically risqué examples of all-time seductive cinematic moments. The Criterion Collection's beautifully packaged release of Pandora's Box features a thorough booklet of essays and photos, as well as a biographical documentary about Brooks and an interview with Pabst's son, Michael. After languishing in obscurity for many years preceding her death in the '80s, Louise Brooks will now forever be remembered as Lulu, Hollywood's finest vixen. --Trinie Dalton

Louise Brooks has the type of face that radiates the movie screen, as her luscious eyes tempt and seduce audiences to come join and play with her. Pauline Kael writes, "Her beauty was almost impersonal, she carries it like a gift she doesn't think much about, and confronts us as a naughty girl. When you meet someone like this in life, you're attracted, but you know in your gut she'll be nothing but trouble." Rules in the early days of Hollywood were similar to the early days of the cinema, in which immoral character's like Lulu weren't allowed to openly permit such immoral freedoms and get away with it in the end. And so in Pandora's Box it isn't so surprising after hopping from man to man that Lulu will eventually find herself in the arms of Jack the Ripper, in which she will be punished for her wicked and immoral ways. Film critic Roger Ebert says, "It's more a settling of scores: Anyone who looks that great, and lives life on her own terms, has to be swatted down by fate or the rest of us will grow discouraged."