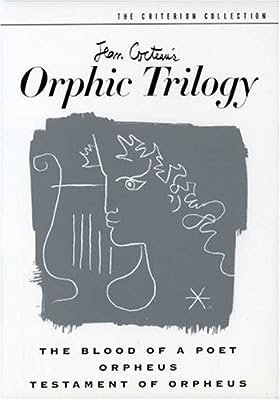 Price: $79.95
As of 2022-08-09 10:51:01 UTC (more info)
Product prices and availability are accurate as of 2022-08-09 10:51:01 UTC and are subject to change. Any price and availability information displayed on http://www.amazon.com/ at the time of purchase will apply to the purchase of this product.
Availability: Not Available - stock arriving soon
Buy Now from Amazon
Product Information (more info)
CERTAIN CONTENT THAT APPEARS ON THIS SITE COMES FROM AMAZON SERVICES LLC. THIS CONTENT IS PROVIDED 'AS IS' AND IS SUBJECT TO CHANGE OR REMOVAL AT ANY TIME.

Decadent, subversive, and bristling with artistic invention, the myth-born cinema of Jean Cocteau disturbs as much as it charms. Cocteau was the most versatile of artists in prewar Paris. Poet, novelist, playwright, painter, celebrity, and maker of cinema-his many talents converged in bold, dreamlike films that continue to enthrall audiences around the world. In The Blood of Poet, Orpheus, and Testament of Orpheus, Cocteau utilizes the Orphic myth to explore the complex relationships between the artist and his creations, reality and the imagination. The Criterion Collection is proud to present the DVD premiere of the Orphic Trilogy in a special limited-edition three-disc box set.

Blood of a Poet
"Poets . . . shed not only the red blood of their hearts but the white blood of their souls," proclaimed Jean Cocteau of his groundbreaking first film-an exploration of the plight of the artist, the power of metaphor and the relationship between art and dreams. One of cinema's great experiments, this first installment of the Orphic Trilogy stretches the medium to its limits in an effort to capture the poet's obsession with the struggle between the forces of life and death. Criterion is proud to present The Blood of a Poet (Le Sang d'un poète).

Orpheus
Jean Cocteau's 1940s update of the Orphic myth depicts Orpheus (Jean Marais), a famous poet scorned by the Left Bank youth, and his love for both his wife Eurydice (Marie Déa) and the mysterious Princess (Maria Casarès). Seeking inspiration, the poet follows the Princess from the world of the living to the land of the deceased through Cocteau's trademark "mirrored portal." As the myth unfolds, the director's visually poetic style pulls the audience into realms both real and imagined in this, the centerpiece to his Orphic Trilogy. Criterion is proud to present Orpheus (Orphée) in a gorgeous new digital transfer.

Testament of Orpheus
In his last film, legendary writer/artist/filmmaker Jean Cocteau portrays an 18th-century poet who travels through time on a quest for divine wisdom. In a mysterious wasteland, he meets several symbolic phantoms that bring about his death and resurrection. With an eclectic cast that includes Pablo Picasso, Jean-Pierre Leáud, Jean Marais and Yul Brynner, Testament of Orpheus (Le Testament de Orphée) brings full circle the journey Cocteau began in The Blood of a Poet, an exploration of the torturous relationship between the artist and his creations. Criterion is proud to present the last installment of the Orphic Trilogy in a new digital transfer.

The Blood of a Poet
"A realistic documentary of unreal situations" reads the introductory card of Jean Cocteau's debut film, which recalls the work of the silent surrealists (notably Luis Buñuel and Salvador Dalí's Un Chien Andalou and L'Âge d'Or). Cocteau uses dream imagery to explore poetry, artistic creation, memory, death, and rebirth in four separate fantasy sequences. In the first scene, an artist confronts his creations when they take on a life of their own. In the second, he dives through a mirror (a primitive but startling effect Cocteau refines for Orpheus) and into a skewed hall where every door reveals a fantastic dream scene. The third sequence finds a gang of boys turning a snowball fight into a cruel war, and in the last an audience gathers to witness a dead boy's resurrection amidst a strange card game. These descriptions do little to communicate the poetry of each segment, which rely on creative imagery to create meaning not in stories but in symbols and metaphors. Cocteau's realization is often stiff and stilted, the work of a visual artist transforming still images into an medium that moves through time, but it's never less than beautiful and evocative. Cocteau returned to many of the same themes in Orpheus and The Testament of Orpheus. --Sean Axmaker

Orpheus
A Parisian poet becomes seduced by the prospect of eternal fame in Jean Cocteau's jazzy 1949 update of the ancient Greek myth of Orpheus. The café set won't give successful Orpheus (Jean Marais) the time of day, so he obliges when the Princess of Death (Maria Casarés) orders him into her Rolls Royce with her injured young protégé. It isn't long before the poet realizes the commanding Princess is no ordinary benefactor of the arts; for one thing, she can travel through mirrors. The next day, Orpheus returns to his frantic wife Eurydice (Marie Déa) with the kindly chauffeur Heurtibise (François Périer), but remains distracted by the Princess and the cryptic messages from her car radio. The equally smitten Princess eventually takes Eurydice before her time, which results in an underworld trial about her actions. To get his wife back, Orpheus must promise to never to look at his wife, but his heart's not in it. This black-and-white film slyly explores the dark side of the creative urge with panache. Dreamy and mesmerizing, it depicts an underworld not too different from everyday life. With subtitles. --Diane Garrett

The Testament of Orpheus
It is the unique power of the cinema to allow a great many people to dream the same dream together and to present illusion to us as if it were strict reality. It is, in short, an admirable vehicle for poetry." Jean Cocteau, at age 70, thus ruminates on the life and purpose of the creative artist in a poetic essay. Cocteau himself stars as a time-traveling poet bopping helplessly through the ages until an experimental scientist grounds him in a kind of never-never land where he defends himself to the judges of Orpheus, dies, and is resurrected to complete his sentence: "condemned to live." Though the film opens with scenes from Orpheus, the series of symbolic encounters and surreal images more resembles The Blood of a Poet. What's different is his cinematic assurance and sly sense of humor: shot through with jokey gags and playful imagery, the film is less philosophical treatise than career summation by way of farewell party. He's invited fictional characters (most of the cast of Orpheus) and real-life friends (cameos range from Brigitte Bardot to Yul Brynner to Pablo Picasso) from his past and present to send him off to an uncertain future. The new Home Vision video and Criterion DVD releases feature the restored color sequence. Cocteau died in 1963, three years after completing the film. --Sean Axmaker

Beauty and the Beast (The Criterion Coll...