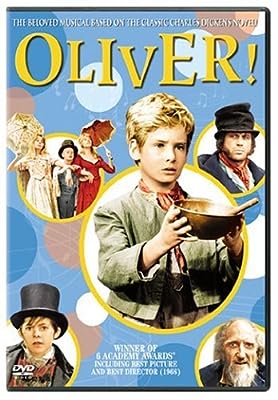 Price: $14.99
As of 2022-09-25 15:59:13 UTC (more info)
Product prices and availability are accurate as of 2022-09-25 15:59:13 UTC and are subject to change. Any price and availability information displayed on http://www.amazon.com/ at the time of purchase will apply to the purchase of this product.
Availability: Not Available - stock arriving soon
Buy Now from Amazon
Product Information (more info)
CERTAIN CONTENT THAT APPEARS ON THIS SITE COMES FROM AMAZON SERVICES LLC. THIS CONTENT IS PROVIDED 'AS IS' AND IS SUBJECT TO CHANGE OR REMOVAL AT ANY TIME.

Experience the high-spirited adventures of Oliver Twist in this Oscar(r)-winning musical adaptation of Charles Dickens' classic tale! Young Oliver (Mark Lester) is an orphan who escapes the cheerless life of the workhouse and takes to the streets of 19th-Century London. He's immediately taken in by a band of street urchins, headed by the lovable villain, Fagin (Ron Moody), his fiendish henchman, Bill Sikes (Oliver Reed), and his loyal apprentice, The Artful Dodger (Jack Wild). Through his education in the fine points of pick-pocketing, Oliver makes away with an unexpected treasure... a home and a family of his own. Set to a heartfelt score that includes such favorites as "Consider Yourself," "Where Is Love?" and "As Long As He Needs Me," Oliver! leads us on a journey in search of love, belonging, and honor among thieves. Winner of six Academy Awards(r) (1968), including Best Picture and Best Score, Oliver! will steal your heart! Note: This is a 2 sided DVD. The same song will play on both sides of the DVD

Film buffs and critics can argue until their faces turn blue about whether this lavish Dickensian musical deserved the Academy Award for Best Picture of 1968, but the movie speaks for itself on grandly entertaining terms. Adapted from Dickens's classic novel, it's one of the most dramatically involving and artistically impressive musicals of the 1960s, directed by Carol Reed with a delightful enthusiasm that would surely have impressed Dickens himself. Mark Lester plays the waifish orphan Oliver Twist, who is befriended by the pickpocketing Artful Dodger (Jack Wild) and recruited into the gang of boy thieves led by Fagin (played to perfection by Ron Moody). The villainous Bill Sikes (Oliver Reed) casts his long shadow over Oliver and his friends, but the young orphan is still able to find loving care in the most desperate of circumstances. Full of memorable melodies and splendid lyrics, Oliver! is a timeless film, prompting even hard-to-please critic Pauline Kael to call it "a superb demonstration of intelligent craftsmanship," and to further observe that "it's as if the movie set out to be a tribute to Dickens and his melodramatic art as well as to tell the story of Oliver Twist." --Jeff Shannon

Out of the Past