Of Mice and Men 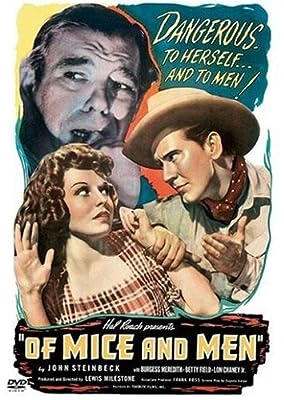 Price: $9.98
As of 2021-10-23 22:37:37 UTC (more info)
Product prices and availability are accurate as of 2021-10-23 22:37:37 UTC and are subject to change. Any price and availability information displayed on http://www.amazon.com/ at the time of purchase will apply to the purchase of this product.
Availability: Not Available - stock arriving soon
Buy Now from Amazon
Product Information (more info)
CERTAIN CONTENT THAT APPEARS ON THIS SITE COMES FROM AMAZON SERVICES LLC. THIS CONTENT IS PROVIDED 'AS IS' AND IS SUBJECT TO CHANGE OR REMOVAL AT ANY TIME.

Truly one of the unsung triumphs of 1939, this heartfelt adaptation of John Steinbeck's morality tale of two itinerant migrant workers seems just as fresh and powerful decades after its release. Lon Chaney Jr. gives the performance of a lifetime as the sweet yet feeble-minded Lennie, who is befriended by the weary Burgess Meredith. They both would be lost without each other in a rather mixed-up world. Sensitively directed by Lewis Milestone (All Quiet on the Western Front), the film features the first pre-credit sequence in American film history. There's also a nice score by Aaron Copland. --Bill Desowitz

Once Upon a Time in America (Two-Disc Sp...