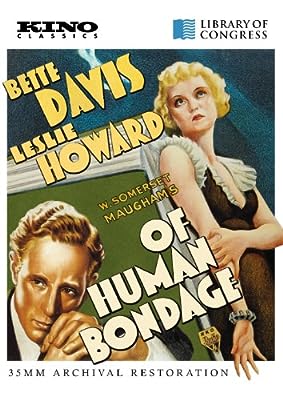 Price: $14.99
As of 2021-10-22 07:45:33 UTC (more info)
Product prices and availability are accurate as of 2021-10-22 07:45:33 UTC and are subject to change. Any price and availability information displayed on http://www.amazon.com/ at the time of purchase will apply to the purchase of this product.
Availability: Not Available - stock arriving soon
Buy Now from Amazon
Product Information (more info)
CERTAIN CONTENT THAT APPEARS ON THIS SITE COMES FROM AMAZON SERVICES LLC. THIS CONTENT IS PROVIDED 'AS IS' AND IS SUBJECT TO CHANGE OR REMOVAL AT ANY TIME.

Philip Carey (Leslie Howard) is a sensitive but unsuccessful artist living in Paris who abandons his fanciful ambitions and enrolls in a London medical school. Despite a slight physical deformity he overcomes his awkwardness and falls in love with a low-class, money-hungry waitress, Mildred Rogers (Bette Davis, in her Oscar nominated performance). Philip is obsessed with the callous woman, but when he discovers Mildred has been dating other men, he finally realizes the relationship is over and finds a new love. Although Mildred runs off with another medical student, Philip takes her back when she returns with news that she is pregnant. Mildred continues to treat him badly, and Philip's devotion to her threatens his career and his chance for future happiness. STARRING TWO-TIME ACADEMY AWARD WINNER BETTE DAVIS (All About Eve, Whatever Happened to Baby Jane) & TWO-TIME ACADEMY AWARD NOMINEE LESLIE HOWARD (Gone With The Wind, Pygmalion)