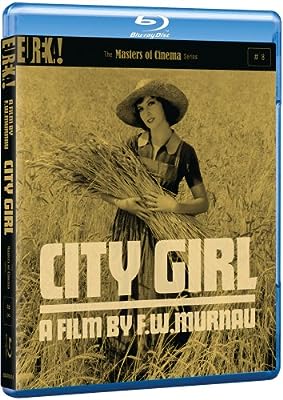 Price: $29.47
As of 2023-02-01 06:00:18 UTC (more info)
Product prices and availability are accurate as of 2023-02-01 06:00:18 UTC and are subject to change. Any price and availability information displayed on http://www.amazon.com/ at the time of purchase will apply to the purchase of this product.
Availability: Not Available - stock arriving soon
Buy Now from Amazon
Product Information (more info)
CERTAIN CONTENT THAT APPEARS ON THIS SITE COMES FROM AMAZON SERVICES LLC. THIS CONTENT IS PROVIDED 'AS IS' AND IS SUBJECT TO CHANGE OR REMOVAL AT ANY TIME.

After the visual fireworks of Sunrise and the now-lost splendour of 4 Devils, F. W. Murnau turned his attention to this vivid, painterly study of an impulsive and fragile marriage among the wheatfields of Minnesota. During a brief stay in Chicago, innocent farmer s son Lem falls for and weds Kate, a hard-bitten but lonely waitress. Upon bringing her home at the start of harvest time, the honeymoon soon turns into a claustrophobic struggle as they contend with the bitter scorn of his father and the invasive, leering jealousy of the farm s labouring community.

Tenderly romantic and tough-minded in equal measure, City Girl is one of cinema s great pastorals, featuring some of the most delicate performances Murnau ever filmed and influencing directors such as Terrence Malick and Jean Vigo.

The Masters of Cinema Series is proud to present Murnau s penultimate film in a glorious HD transfer.