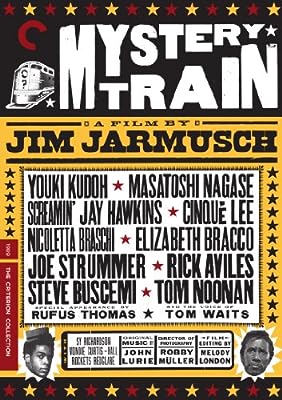 Price: $24.02
As of 2022-10-07 17:57:34 UTC (more info)
Product prices and availability are accurate as of 2022-10-07 17:57:34 UTC and are subject to change. Any price and availability information displayed on http://www.amazon.com/ at the time of purchase will apply to the purchase of this product.
Availability: Not Available - stock arriving soon
Buy Now from Amazon
Product Information (more info)
CERTAIN CONTENT THAT APPEARS ON THIS SITE COMES FROM AMAZON SERVICES LLC. THIS CONTENT IS PROVIDED 'AS IS' AND IS SUBJECT TO CHANGE OR REMOVAL AT ANY TIME.

Elvis haunts Japanese tourists, an Italian widow and a British outlaw at a Memphis hotel. Directed by Jim Jarmusch.

Every Jim Jarmusch film involves a journey into a foreign culture. Mystery Train, in which three journeys intersect, marks one of his more diverting efforts. In the finest ("Far from Yokohama"), a Japanese couple makes a pilgrimage to Memphis. Playful Mitzuko (Youki Kudoh) worships Elvis Presley, while sad-faced Jun (Masotoshi Nagase) prefers Carl Perkins. They stay at a haunted hotel overseen by a sharp-dressed clerk (R&B wild man Screamin' Jay Hawkins) and a quirky bellboy (Spike Lee's brother, Cinqué) in a broken-down city that recalls the New York of Jarmusch's debut, Permanent Vacation: filled with rust, weeds--and character (Dead Man cinematographer Robby Müller finds the beauty in every blemish). In the following chapters ("The Ghost" and "Lost in Space"), two other foreigners converge at the same locale: Italian widow Luisa (Nicoletta Braschi, wife of Roberto Begnini), who drops by during a layover, and heartbroken Brit Johnny (the Clash's Joe Strummer), who seeks a hideout. If these sections are less engaging, Hawkins and Lee are consistently amusing ("You look like a damn mosquito-legged chimpanzee" the former quips at one point). Other highlights include Tom Noonan as a sleazy hustler, Steve Buscemi as Johnny's straight-arrow brother-in-law, Tom Waits as an unseen disc jockey, and a savory score from sax player John Lurie.

The supplements start with an audio-only Q&A, in which Jarmusch answers 35 questions from fans, including one about Hawkins, whose signature song figures prominently in Stranger Than Paradise, explaining that he cast him, in part, because he saw no profit from the use of "I Put a Spell on You." This essential release concludes with excerpts from a film about the late performer, a fine featurette on the locations, two photo galleries, and essays by critic Dennis Lim and Elvis biographer Peter Guralnik. --Kathleen C. Fennessy