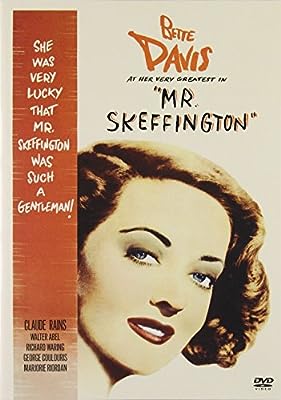 Price: $13.99
As of 2022-12-05 22:30:48 UTC (more info)
Product prices and availability are accurate as of 2022-12-05 22:30:48 UTC and are subject to change. Any price and availability information displayed on http://www.amazon.com/ at the time of purchase will apply to the purchase of this product.
Availability: Not Available - stock arriving soon
Buy Now from Amazon
Product Information (more info)
CERTAIN CONTENT THAT APPEARS ON THIS SITE COMES FROM AMAZON SERVICES LLC. THIS CONTENT IS PROVIDED 'AS IS' AND IS SUBJECT TO CHANGE OR REMOVAL AT ANY TIME.

Bette Davis stars as a beautiful but vain society woman who, to pay her brother's gambling debts, marries a financier she does not love--Mr.Skeffington. The marriage does not last, and the former Mrs.Skeffington flits from beau to beau casually leaving a trail of broken hearts. But when she contracts a near-fatal case of diphtheria, her beauty is destroyed by the terrible scars left by the disease. Now middle-aged, scarred and unable to win men's hearts with her beauty, she finally finds love with the now-blind man she had wed years before--Mr.Skeffington.

Fanny Skeffington, an incorrigible society flirt of the WWI era, was one of the meatiest roles and most exasperating women Bette Davis ever played. Flighty Fanny loves the attention of her male suitors, but marries the steadfast Jewish financier Job Skeffington (Claude Rains) for security; long after their wedding day, she still enjoys receiving gentlemen callers. Time catches up with Fanny, of course, and the bills are due by the time World War II rolls around.

Mr. Skeffington is a vintage Warner Bros. workout for Davis, who never shied away from playing unsympathetic or physically unappealing roles. (Her main worry here was looking pretty enough in the early reels to justify Fanny's reputation.) Her theatrical performance and Rains's impeccable work carry the handsomely dressed story through its many melodramatic shifts. The dialogue by Julius and Philip Epstein (who were doing Casablanca around this time) has the sprung rhythm of screwball comedy, although director Vincent Sherman and the cast don't always seem to have noticed this. There's also the growing issue of anti-Semitism--a subject rare in Hollywood prior to this--especially as it concerns Fanny and Job's daughter. But mostly the film has Bette Davis, who strides headfirst into the gray areas (her indifferent treatment of her daughter is especially unappetizing), a fearless attitude that looks like the polar opposite of Fanny Skeffington's vanity. --Robert Horton