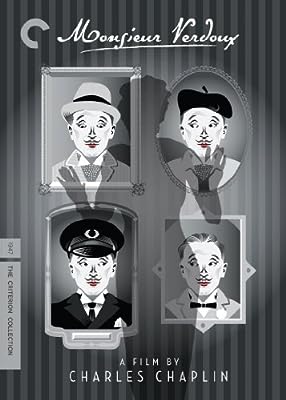 Price: $22.99
As of 2023-02-05 08:03:43 UTC (more info)
Product prices and availability are accurate as of 2023-02-05 08:03:43 UTC and are subject to change. Any price and availability information displayed on http://www.amazon.com/ at the time of purchase will apply to the purchase of this product.
Availability: Not Available - stock arriving soon
Buy Now from Amazon
Product Information (more info)
CERTAIN CONTENT THAT APPEARS ON THIS SITE COMES FROM AMAZON SERVICES LLC. THIS CONTENT IS PROVIDED 'AS IS' AND IS SUBJECT TO CHANGE OR REMOVAL AT ANY TIME.

Charlie Chaplin plays shockingly against type in his most controversial film, a brilliant and bleak black comedy about money, marriage, and murder. Chaplin is a twentieth-century Bluebeard, an enigmatic family man who goes to extreme lengths to support his wife and child, attempting to bump off a series of wealthy widows (including one played by the indefatigable Martha Raye, in a hilarious performance). This deeply philosophical and wildly entertaining film is a work of true sophistication, both for the moral questions it dares to ask and the way it deconstructs its megastar’s loveable on-screen persona.