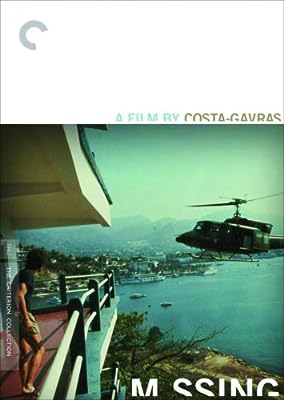 Price: $39.95
As of 2023-02-01 18:27:50 UTC (more info)
Product prices and availability are accurate as of 2023-02-01 18:27:50 UTC and are subject to change. Any price and availability information displayed on http://www.amazon.com/ at the time of purchase will apply to the purchase of this product.
Availability: Not Available - stock arriving soon
Buy Now from Amazon
Product Information (more info)
CERTAIN CONTENT THAT APPEARS ON THIS SITE COMES FROM AMAZON SERVICES LLC. THIS CONTENT IS PROVIDED 'AS IS' AND IS SUBJECT TO CHANGE OR REMOVAL AT ANY TIME.

Missing is political filmmaker extraordinaire Costa-Gavras's compelling, controversial dramatization of the search for American journalist Charles Horman, who mysteriously disappeared during the 1973 coup in Chile. Jack Lemmon and Sissy Spacek give magnetic, emotionally commanding performances as Horman's father and wife, who are led by U.S. embassy and consulate officials through a series of bureaucratic dead-ends before eventually uncovering the terrifying facts about Charles's fate and disillusioning truths about their government. Written and directed with clarity and conscience, the Academy Award winning Missing is a testament to Costa-Gavras's daring.

Man with the Movie Camera