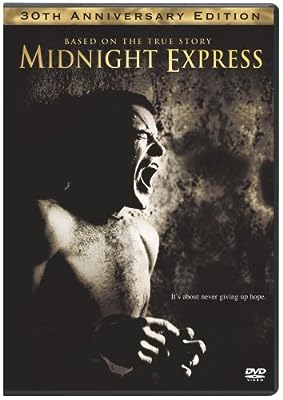 Price: $9.01
As of 2023-02-06 05:38:25 UTC (more info)
Product prices and availability are accurate as of 2023-02-06 05:38:25 UTC and are subject to change. Any price and availability information displayed on http://www.amazon.com/ at the time of purchase will apply to the purchase of this product.
Availability: Not Available - stock arriving soon
Buy Now from Amazon
Product Information (more info)
CERTAIN CONTENT THAT APPEARS ON THIS SITE COMES FROM AMAZON SERVICES LLC. THIS CONTENT IS PROVIDED 'AS IS' AND IS SUBJECT TO CHANGE OR REMOVAL AT ANY TIME.

Brad Davis (The Player, Chariots of Fire) and John Hurt (Contact, Alien) star in this riveting truestory of a young American's nightmarish experiences in a Turkish prison and his unforgettable journey to freedom. Busted for attempting to smuggle hashish out of Istanbul, American college student Billy Hayes (Davis) is thrown into the city's most brutal jail. After suffering through four years of sadistic torture and inhuman conditions, Billy is about to be released when his parole is denied. Only his inner courage and the support of a fellow inmate (Hurt) give him the strength to catch the MIDNIGHT EXPRESS ... and escape his living hell.