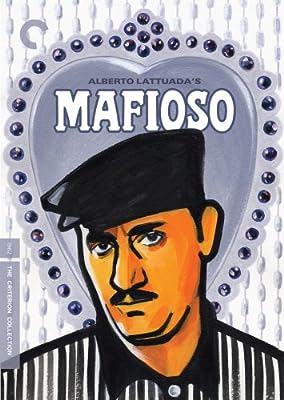 Price: $63.97
As of 2022-11-28 10:37:04 UTC (more info)
Product prices and availability are accurate as of 2022-11-28 10:37:04 UTC and are subject to change. Any price and availability information displayed on http://www.amazon.com/ at the time of purchase will apply to the purchase of this product.
Availability: Not Available - stock arriving soon
Buy Now from Amazon
Product Information (more info)
CERTAIN CONTENT THAT APPEARS ON THIS SITE COMES FROM AMAZON SERVICES LLC. THIS CONTENT IS PROVIDED 'AS IS' AND IS SUBJECT TO CHANGE OR REMOVAL AT ANY TIME.

In Alberto Lattuada s brilliant dark comedy MAFIOSO, auto-factory foreman Nino (Alberto Sordi) takes his proper, modern wife (Norma Bengell) and two blonde daughters from industrial Milan to antiquated rural Sicily to visit his family and get back in touch with his roots. But Antonio gets more than he bargained for when he discovers some harsh truths about his ancestors and himself. The first Italian film to dramatize the modern mafia, Lattuada s devastatingly funny character study is equal parts culture-clash farce and existential nightmare.

As one of the earliest films about the mafia's influence over the personal lives of those involved, Alberto Lattuada's Mafioso also established the way humor is used in gangster movies as respite from tragic, violent circumstances. In it, Antonio (Alberto Sordi), nicknamed Nino or Ninuzzo by his Sicilian peers, takes his blonde, northern Italian wife, Marta (Norma Bengell) and two daughters back to Sicily, since they know little of his Sicilian heritage. Taking vacation leave from his factory job in Milan, Nino's family vacation becomes a full-force effort to convince his modern wife and traditional parents that their differences are merely superficial. Hilarious scenes underscore the differences between northern and southern Italian culture. Marta is appalled by the multi-course banquet served, for example, yet the whole family gawks when she lights a cigarette after eating. Once this familial conflict is resolved, by Marta's applying her beautician skills to rid Nino's sister, Rosalia, of profuse body hair, Nino's "other" family beckons. His past alliance to Don Vincenzo, the town's mysteriously powerful sports association president, means that he owes repayment for past favors. Besides Mafioso's sumptuous depictions of robust Sicilian life, it also humanizes mafia members to explain their eye-for-an-eye mentality. Don Vincenzo is certainly a prototypical Godfather, fair and uncompromising. From the outset, Mafioso emphasizes the importance of love and loyalty, giving one a renewed sense of appreciation for those one knows, trusts, and relies upon. --Trinie Dalton