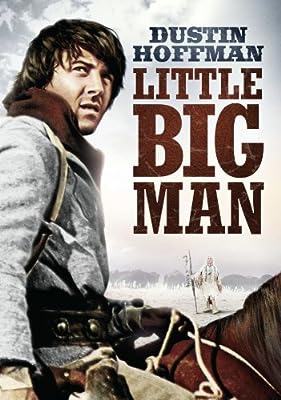 Price: $9.99
As of 2022-11-27 15:58:30 UTC (more info)
Product prices and availability are accurate as of 2022-11-27 15:58:30 UTC and are subject to change. Any price and availability information displayed on http://www.amazon.com/ at the time of purchase will apply to the purchase of this product.
Availability: Not Available - stock arriving soon
Buy Now from Amazon
Product Information (more info)
CERTAIN CONTENT THAT APPEARS ON THIS SITE COMES FROM AMAZON SERVICES LLC. THIS CONTENT IS PROVIDED 'AS IS' AND IS SUBJECT TO CHANGE OR REMOVAL AT ANY TIME.

Recounting how the West was won through the eyes of a white man raised as a Native American, Arthur Penn's 1970 adaptation of Thomas Berger's satirical novel was a comic yet stinging allegory about the bloody results of American imperialism. As a misguided 20th-century historian listens, 121-year-old Jack Crabb (Dustin Hoffman) narrates the story of being the only white survivor of Custer's Last Stand. White orphan Crabb was adopted by the Cheyenne, renamed "Little Big Man," and raised in the ways of the "Human Beings" by paternal mentor Old Lodge Skins (Chief Dan George), accepting non-conformity and living peacefully with nature. Violently thrust into the white world, Jack meets a righteous preacher (Thayer David) and his wife (Faye Dunaway), tries to be a gunfighter under the tutelage of Wild Bill Hickock (Jeff Corey), and gets married. Returned to the Cheyenne by chance, Jack prefers life as a Human Being. The carnage wreaked by the white man in the Washita massacre and the lethal fallout from the egomania of General George A. Custer (Richard Mulligan) at Little Big Horn, however, show Crabb the horrific implications of Old Lodge Skins' sage observation, "There is an endless supply of White Men, but there has always been a limited number of Human Beings."

Listen to Britain and Other Films By Hum...

Lonely are the Brave (Universal Backlot ...