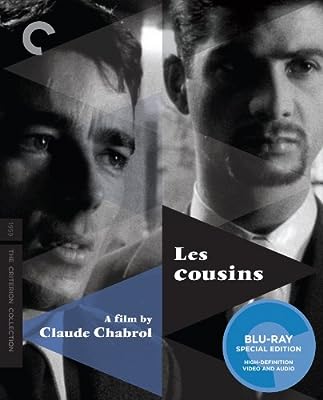 Price: $39.95
As of 2022-11-27 15:16:43 UTC (more info)
Product prices and availability are accurate as of 2022-11-27 15:16:43 UTC and are subject to change. Any price and availability information displayed on http://www.amazon.com/ at the time of purchase will apply to the purchase of this product.
Availability: Not Available - stock arriving soon
Buy Now from Amazon
Product Information (more info)
CERTAIN CONTENT THAT APPEARS ON THIS SITE COMES FROM AMAZON SERVICES LLC. THIS CONTENT IS PROVIDED 'AS IS' AND IS SUBJECT TO CHANGE OR REMOVAL AT ANY TIME.

In Les cousins, Claude Chabrol (Les bonnes femmes) crafts a sly moral fable about a provincial boy who comes to live with his sophisticated bohemian cousin in Paris. Through these seeming opposites, Chabrol conjures a piercing, darkly comic character study that questions notions of good and evil, love and jealousy, and success in the modern world. A mirror image of Le beau Serge, Chabrol’s debut, Les cousins recasts that film’s stars, Jean-Claude Brialy and Gérard Blain, in startlingly reversed roles. This dagger-sharp drama won the Golden Bear at the Berlin Film Festival and was an important precursor to the French New Wave.