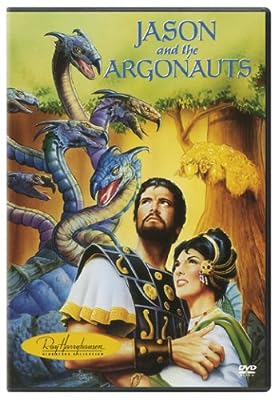 Price: $14.99
As of 2022-12-09 15:22:12 UTC (more info)
Product prices and availability are accurate as of 2022-12-09 15:22:12 UTC and are subject to change. Any price and availability information displayed on http://www.amazon.com/ at the time of purchase will apply to the purchase of this product.
Availability: Not Available - stock arriving soon
Buy Now from Amazon
Product Information (more info)
CERTAIN CONTENT THAT APPEARS ON THIS SITE COMES FROM AMAZON SERVICES LLC. THIS CONTENT IS PROVIDED 'AS IS' AND IS SUBJECT TO CHANGE OR REMOVAL AT ANY TIME.

Fantastic special effects by Ray Harryhausen and exciting mythological adventure make this a film that is fun for everyone. It's the story of Jason (Todd Armstrong), a fearless sailor and explorer, who returns to the kingdom of Thessaly after a 20-year voyage to make his rightful claim to the throne. But to do so, Jason must first find the magical Golden Fleece. He selects a crew and with the help of Hera, Queen of the Gods, sets sail in search of the Fleece. Jason and his crew must overcome incredible obstacles including a 100-foot bronze giant, the venomous Hydraa huge creature with the heads of seven snakes, and a spectacular battle with an army of skeletons.

Arguably the most intelligently written film to feature the masterful stop-motion animation of Ray Harryhausen, Jason and the Argonauts is a colorful adventure that takes full advantage of Harryhausen's "Dynarama" process. Inspired by the Greek myth, the story begins when the fearless explorer Jason (Todd Armstrong) returns to the kingdom of Thessaly to make his rightful claim to the throne, but the gods proclaim that he must first find the magical Golden Fleece. Consulting Hera, the queen of gods, Jason recruits the brave Argonauts to crew his ship, and they embark on their eventful journey. Along the way they encounter a variety of mythic creatures, including the 100-foot bronze god Talos, the batlike Harpies, the seven-headed reptilian Hydra, and an army of skeletons wielding sword and shield. This last sequence remains one of the finest that Harryhausen ever created, and it's still as thrilling as anything from the age of digital special effects. Harryhausen was the true auteur of his fantasy films, and his brilliant animation evokes a timeless sense of wonder. Jason and the Argonauts is a prime showcase for Harryhausen's talent--a wondrous product of pure imagination and filmmaking ingenuity. --Jeff Shannon