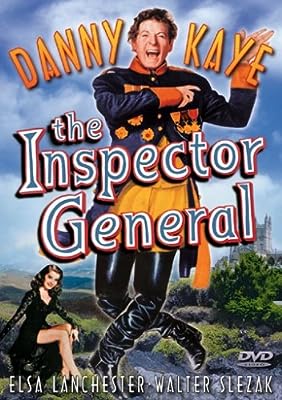 Price: $6.98
As of 2022-11-29 12:35:48 UTC (more info)
Product prices and availability are accurate as of 2022-11-29 12:35:48 UTC and are subject to change. Any price and availability information displayed on http://www.amazon.com/ at the time of purchase will apply to the purchase of this product.
Availability: Not Available - stock arriving soon
Buy Now from Amazon
Product Information (more info)
CERTAIN CONTENT THAT APPEARS ON THIS SITE COMES FROM AMAZON SERVICES LLC. THIS CONTENT IS PROVIDED 'AS IS' AND IS SUBJECT TO CHANGE OR REMOVAL AT ANY TIME.

The Inspector General is a Technicolor tour-de-force for Danny Kaye, who stars as Georgi, a goodhearted soul traveling with a medicine show. Customers are promised the best of health when they purchase a bottle of phony magic elixir, but Georgi's conscience won't allow him to go along with the ruse. Kicked out of the show, Georgi stumbles into a village where he is mistaken for the Inspector General. The corrupt mayor, anxious to protect his monopoly of power, attempts to bribe the illiterate vagabond. The bewildered Georgi soon finds himself the target of an assassination plot! The delightfully extravagant musical interludes earned the film a Golden Globe Award for Best Motion Picture Score.

Intruder In The Dust [Remaster]