In Cold Blood (The Criterion Collection) 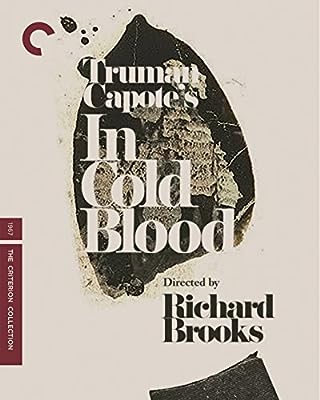 Price: $29.95
As of 2022-08-17 08:38:35 UTC (more info)
Product prices and availability are accurate as of 2022-08-17 08:38:35 UTC and are subject to change. Any price and availability information displayed on http://www.amazon.com/ at the time of purchase will apply to the purchase of this product.
Availability: Not Available - stock arriving soon
Buy Now from Amazon
Product Information (more info)
CERTAIN CONTENT THAT APPEARS ON THIS SITE COMES FROM AMAZON SERVICES LLC. THIS CONTENT IS PROVIDED 'AS IS' AND IS SUBJECT TO CHANGE OR REMOVAL AT ANY TIME.

Truman Capote’s best seller, a breakthrough narrative account of real-life crime and punishment, became an equally chilling film in the hands of writer-director Richard Brooks (Cat on a Hot Tin Roof). Cast for their unsettling resemblances to the killers they play, Robert Blake (Lost Highway) and Scott Wilson (The Great Gatsby) give authentic, unshowy performances as Perry Smith and Richard Hickock, who in 1959 murdered a family of four in Kansas during a botched robbery. Brooks brings a detached, documentary-like starkness to this uncompromising view of an American tragedy and its aftermath; at the same time, stylistically In Cold Blood is a filmmaking master class, with clinically precise editing, chiaroscuro black-and-white cinematography by the great Conrad L. Hall (American Beauty), and a menacing jazz score by Quincy Jones. DVD SPECIAL EDITION FEATURES  • New 4K digital restoration • New interview with cinematographer John Bailey on the film’s cinematography • New interview with film historian Bobbie O’Steen on the film’s editing • New interview with film critic and jazz historian Gary Giddins on the film’s music by Quincy Jones • New interview with writer Douglass Daniel on director Richard Brooks • Interview with Brooks from 1988 from the French television series Cinéma cinemas • Interview with actor Robert Blake from 1968 from the British television series Good Evening with Jonathan King • With Love from Truman, a short 1966 documentary featuring novelist Truman Capote, directed by Albert and David Maysles • Two archival NBC interviews with Capote: one following the author on a 1966 visit to Holcomb, Kansas, and the other conducted by Barbara Walters in 1967 • Trailer • PLUS: An essay by critic Chris Fujiwara

Investigation of a Citizen Above Suspici...

I Married a Witch (Criterion Collection)