House of Games (The Criterion Collection) 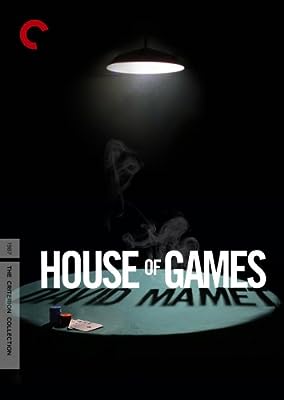 Price: $39.95
As of 2022-08-18 22:57:12 UTC (more info)
Product prices and availability are accurate as of 2022-08-18 22:57:12 UTC and are subject to change. Any price and availability information displayed on http://www.amazon.com/ at the time of purchase will apply to the purchase of this product.
Availability: Not Available - stock arriving soon
Buy Now from Amazon
Product Information (more info)
CERTAIN CONTENT THAT APPEARS ON THIS SITE COMES FROM AMAZON SERVICES LLC. THIS CONTENT IS PROVIDED 'AS IS' AND IS SUBJECT TO CHANGE OR REMOVAL AT ANY TIME.

It's the shrink vs. the shark in the ultimate mind game! Starring Oscar (r) nominee* Lindsay Crouse ( The Insider ) and Joe Montegna ( The Godfather III ) as an unlikely team of conartists, this "witty and devious" ( Time ) psychological thriller is Oscar (r) nominee** David Mamet's directorial debut. It's an "extraordinary" ( Newsweek ) and "thrilling funhouse" ( New York Pos t) of mental gamesmanship that will keep you guessing until its exciting end! When a suicidal patient reveals that his gambling debt has him at the end of his rope, dedicated psychiatrist Margaret Ford (Crouse) enters into the shadowy underground world of gaming to help him out. At a seedy casino, she boldly confronts Mike (Montegna), the con man who holds her patient's markers. Duped into a high-stakes poker match, Margaret becomes intoxicated by Mike's mastery, as he both cheats at the game and charms her. She quickly falls for him, turning a blind eye to the fact that he's a swindler who can't be trusted.