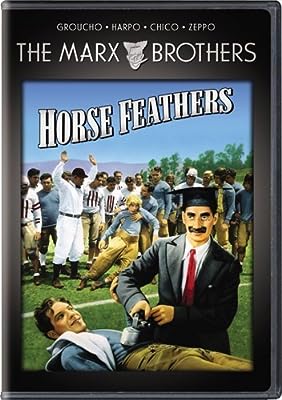 Price: $8.22
As of 2022-10-03 04:09:21 UTC (more info)
Product prices and availability are accurate as of 2022-10-03 04:09:21 UTC and are subject to change. Any price and availability information displayed on http://www.amazon.com/ at the time of purchase will apply to the purchase of this product.
Availability: Not Available - stock arriving soon
Buy Now from Amazon
Product Information (more info)
CERTAIN CONTENT THAT APPEARS ON THIS SITE COMES FROM AMAZON SERVICES LLC. THIS CONTENT IS PROVIDED 'AS IS' AND IS SUBJECT TO CHANGE OR REMOVAL AT ANY TIME.

The four Marx Brothers – Groucho, Harpo, Chico and Zeppo – are at the top of their game in the uproarious parody of college life, Horse Feathers. As president of Huxley College, the fun-loving Professor Wagstaff (Groucho) attempts to help his son (Zeppo) finally graduate after 12 years by arranging to “buy” professional football players for an upcoming big game against rival Darwin University. The plan takes an unexpected twist, however, when a bootlegger (Chico) and a dogcatcher (Harpo) are mistaken for the athletes and accidentally hired instead. Featuring their trademark insanity, including a climatic football sequence that has to be seen to be believed, this quintessential Marx Brothers’ comedy earned a place on the AFI’s 100 Years…100 Laughs list.