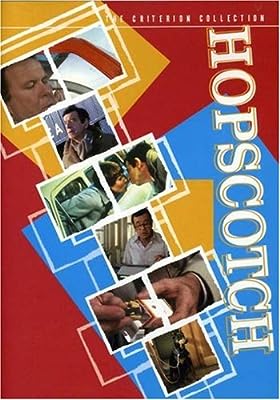 Price: $29.95
As of 2022-10-07 16:47:56 UTC (more info)
Product prices and availability are accurate as of 2022-10-07 16:47:56 UTC and are subject to change. Any price and availability information displayed on http://www.amazon.com/ at the time of purchase will apply to the purchase of this product.
Availability: Not Available - stock arriving soon
Buy Now from Amazon
Product Information (more info)
CERTAIN CONTENT THAT APPEARS ON THIS SITE COMES FROM AMAZON SERVICES LLC. THIS CONTENT IS PROVIDED 'AS IS' AND IS SUBJECT TO CHANGE OR REMOVAL AT ANY TIME.

The CIA and the KGB work together to sabatoge the literary ambitions of a fired CIA agent who has decided to get even with the organization by publishing a book which outlines years of dirty secrets.

Walter Matthau is in peak form in Hopscotch, a featherweight spy-game comedy in which he plays a CIA agent who's way smarter than his dimwitted superiors. That's the fantasy part--this amusing cat-and-mouse game is so lopsided that you can't take it seriously. The movie's charm is derived from the sardonic pleasure with which Matthau makes his pursuers look like idiots, after they've targeted him for "termination" for publishing a tell-all memoir about his tenure in "the Company." He's no stool pigeon, however; it's his boss (played with blustery thick-headedness by the great Ned Beatty) who's abusing his power, so Matthau recruits an old lover (Glenda Jackson) to join him in a globetrotting game of clandestine cleverness. Under Ronald Neame's too-casual direction, this is a not-so-wild goose chase, but Matthau and Jackson (reuniting after they had fun making the 1978 comedy House Calls) have an easygoing chemistry that's nicely balanced with Matthau's cantankerous shenanigans. --Jeff Shannon