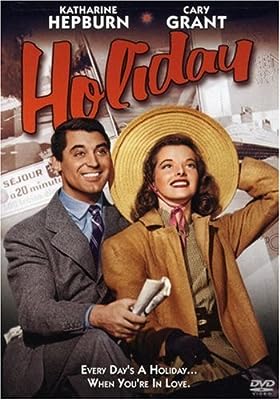 Price: $14.99
As of 2022-11-27 19:32:04 UTC (more info)
Product prices and availability are accurate as of 2022-11-27 19:32:04 UTC and are subject to change. Any price and availability information displayed on http://www.amazon.com/ at the time of purchase will apply to the purchase of this product.
Availability: Not Available - stock arriving soon
Buy Now from Amazon
Product Information (more info)
CERTAIN CONTENT THAT APPEARS ON THIS SITE COMES FROM AMAZON SERVICES LLC. THIS CONTENT IS PROVIDED 'AS IS' AND IS SUBJECT TO CHANGE OR REMOVAL AT ANY TIME.

Johnny Case (Cary Grant), a free-thinking financier, has finally found the girl of his dreams -- Julia Seton (Doris Nolan), the spoiled daughter of a socially prominent millionaire -- and she's agreed to marry him! But when Johnny plans a holiday for the two to enjoy life while they are still young, his fiancée has other plans - she wants Johnny to work in her father's bank! As he tries to decide whether to follow his head or his heart, Johnny can rely on at least one Seton in his corner. She's Linda Seton (Katherine Hepburn), the down-to-earth younger sister of his soon-to-be-wife, and she likes Johnny just the way he is.

This absolutely charming, wholly engaging romantic comedy is the hidden gem of the four collaborations of Katharine Hepburn and Cary Grant. Most everyone's seen The Philadelphia Story, but few know of this unorthodox, hilarious comedy of life among the rich and privileged, though both were Broadway hits by playwright Philip Barry. Grant plays the happy-go-lucky Johnny Case, a self-made man with a dream in his heart of making just enough money to retire on and then traveling around the world. Johnny proposes to the lovely Julia (Doris Nolan) in Lake Placid, but it isn't until he comes to pay her a visit in New York that he discovers she's the daughter of a wealthy industrialist. Although his nonconformity ruffles the feathers of Julia's stuffy father, he's soon won over the whole family--most notably, Julia's rebellious sister Linda (Hepburn), who in becoming Johnny's greatest advocate finds herself irresistibly drawn to him. There's more going on here than a spiffy, surface romance, with Johnny's free-spirit determination going up against rock-hard establishment values, and director George Cukor plays up the social politics of the story just as well as the wonderful, exquisite romance. Hepburn and Grant, as always, are perfectly paired, and given able support by Lew Ayres as the black sheep of Hepburn's family, and Edward Everett Horton and Jean Dixon as Grant's longtime pals. Filmed previously in 1930; Hepburn understudied the role of Linda on Broadway and used a scene from the play in her first screen test. --Mark Englehart Stills from Holiday (click for larger image)